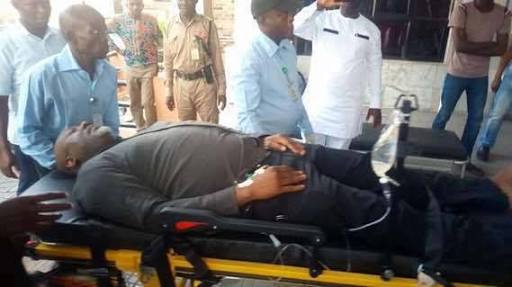 Heavily armed policemen have taken position at the Abuja hospital where
Sen. Dino Melaye is being treated after he allegedly jumped out of a
moving police vehicle and sustained an injury.

A team of policemen trailed Melaye yesterday and re-arrested him after he allegedly escaped.

According
to a statement by the Force Spokesman, ACP Jimoh Moshood, Melaye
escaped from lawful police custody while being taken for arraignment in
Federal High Court, Lokoja, Kogi State from Abuja.

Moshood
alleged that hoodlums and miscreants in two Toyota Hilux vehicles
blocked the police vehicle conveying Melaye around Area 1 roundabout and
took him to an unknown destination.

“The Police team re-enforced and trailed Sen. Dino Melaye to Zankli Hospital, Abuja, where he was re-arrested.

“The Senator would be arraigned in court without further delay,” he assured.

Moshood
said that one of the Toyota Hilux vehicles used by the hoodlums and
miscreants in aiding the escape of the Senator had been recovered by the
police investigation team.

He said the Inspector-General of
Police had directed a thorough investigation into the circumstances
leading to the rescue and escape of Melaye from lawful custody.

0180420 We’re working with ex-Presidents, others to rescue Nigeria — PDP

Foods That Can Help You Look Younger