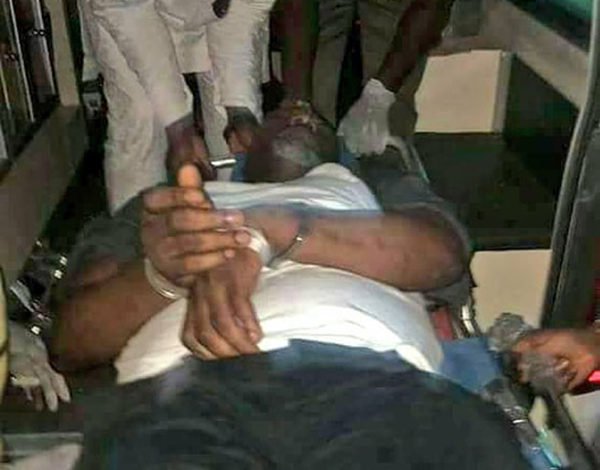 Senators yesterday resolved to adjourn plenary in solidarity with the
embattled Senator Dino Melaye, who is being held by the police in Abuja.

The upper chamber also resolved to invite Inspector General Ibrahim
Idris to tell them the circumstances that led to the arrest and
detention of Melaye.

The police boss is to
appear before the Senate in plenary by 11am today [Thursday] to explain
alleged inhuman treatment being meted to Dino Melaye.

According
to The Nation, Senators took turns to condemn what they described as
“denigration and calculated onslaught against the institution of the
Senate”.

Senator Samuel Anyanwu (Imo East), after what appeared
subdued anger and apprehension in the chamber, drew the attention of his
colleagues to the arrest, detention and hospitalisation of Melaye
allegedly on police order.

Anyanwu, who came under order of
privilege, told the Senate that he was aware that Melaye was being
treated “like a common criminal”.

Senator Chukwuka Utazi (Enugu
North), who seconded the motion, described it as an important motion
that should be given the attention it deserved.

Senator Isa
Hamman Misau (Bauchi Central) noted that even police statement on the
matter was clear that Melaye’s case was still an allegation.

He said it was on record that Melaye had insisted that his life would be in danger, if taken to Kogi State.

He wondered why the police were insisting that Melaye must be taken to Lokoja, the Kogi State capital.

Senator Mohammed Gobir noted that the state he saw Melaye on Tuesday evening was frightening.

Gobir said: “Dino was brought on a stretcher to the hospital. I saw Dino; it was terrible. It was not a good sight.”

A dramatic contribution was added to the debate by Kaduna Central Senator, Shehu Sani.

Sani reminded those in authority that power is transient.

On
his own, Senator Mohammed Ubali Shittu (Jigawa State) noted:
“Yesterday, it was war against the judiciary, today it is war against
the parliament.”

He said it was obvious that some institutions were being used to target persons perceived to be enemies of the government.

Shittu, who noted that what he was saying could cause him his life, said he was prepared to pay the supreme sacrifice.

Adamu said: “In moments like this, it is not a matter of what he did or didn’t do on the floor of this hallowed chamber.

“I
think the issue is how we get him out of the situation he is in. The
emphasis now is what can we do as colleagues to bring him out of this
present predicament he is now in. The outpouring of confrontational
languages does not help us in this situation.”

Senator Oluremi
Tinubu (Lagos Central) said: “We should face the issue. If we are
talking about a particular issue, we should stay with it. When we begin
to bring a government that a lot of people supported to be here to use
whatever happened to implicate the government, I think I’m against
that.

“Immediately Senator Omo-Agege was led away by the police, you will know that the sanctity of this place had been invaded.”

The
Deputy Senate Leader, Senator Bala Ibn Na’Allah, who was delegated to
visit Melaye at the National Hospital, Abuja briefed his colleagues on
his findings.

Senate President Abubakar Bukola Saraki, who summed
up submissions of senators, noted that what was happening was not
healthy for democracy.

He said the prevailing situation portends
danger, especially in the light of the fact that in a matter of months,
the political terrain would practically kick-off with campaigns across
the country.

The prayer to summon the IG to explain circumstances surrounding the arrest and detention of Melaye was unanimously adopted.

Senator
Mao Ohuabunwa (Abia North) raised additional prayer that the Senate
should shutdown to enable members go to the National Hospital to know
what was happening to Melaye.

The prayer was again unanimously adopted.

Saraki,
who stormed the hospital with an entourage of about 40 senators, was
allowed to go into the trauma centre where Melaye was being given
medical attention.

Only eight of the about 40 senators were
allowed to accompany Saraki to the ward, while others were made to wait
in the hospital’s conference hall.

The President of the Senate,
who came out of the ward after spending about 20 minutes with Melaye,
said the embattled lawmaker was in stable condition but that he still
required medical attention.

Here Are Ways To Whiten Your Teeth