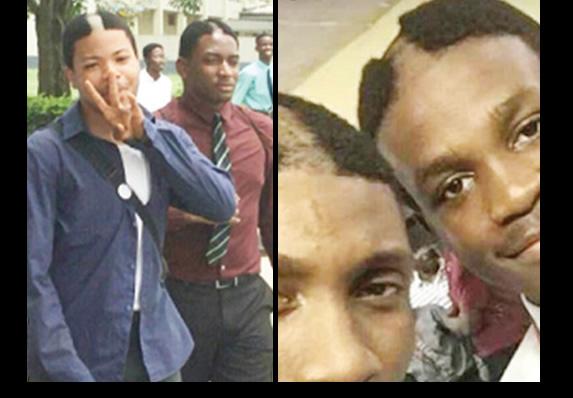 Some ex-students at Covenant University, Ota, Ogun State, have
criticised the institution for shaving the bushy hair of its male
students.

Some alumni, as well as some Nigerians, took to social
media to call out the school following a viral video that captured
students seated in a hall as a man used a hair clipper to pluck hair off
the middle of their heads under the supervision of some staff members.

The
school was also criticised for allegedly using a single unsterilised
hair clipper on all the students on the grounds that they might contract
diseases in the process.

An alumnus, Okoli Offorbuike, said the
action was disdainful and undermined the cliché “Kings and Queens” used
for students at the university.

In one of his posts on Facebook
on the matter, Offorbuike posted the pictures of the General Overseers
of the Living Faith Church, Bishop David Oyedepo, and the Redeemed
Christian Church of God, Worldwide, Pastor Enoch Adeboye, where the
former wore Afro and the other kept hair.

He called on the
university alumni to facilitate the inclusion of a law in the students’
handbook that would accord the students honour, dignity and respect.

He
wrote, “After seeing this act carried out in my Alma Mater, I began to
ask myself that maybe calling students kings and queens in Covenant
University is just a mere cliché. The Bible says faith without work is
dead. I will say Covenant University, without respect for the dignity of
students, is no different from other universities.

“Where
did the student affairs get the idea of shaving students’ hair off? This
is one (Adeboye) of the leading fathers of faith in Africa, yet he
keeps his hair…he is a king and heavily anointed and everyone agrees to
that.

“This is one of Bishop Oyedepo’s full-fledged mentors, T.L.
Osborn, on full-fledged Afro. He was still a king and a great preacher.
Could we call him unkempt? How less bushy is Bishop Oyedepo’s hair in
these pictures and was he less a king? If none could shave off his hair
disgracefully, then why should it be done to students in his school?
This is injustice.”

One Matthias Hungbo, who also claimed to be an alumnus, said there was nothing wrong with the students’ hair.

He said the shaving was in reaction to some students’ failure to take their Bibles for a service held the previous day.

“It’s
appalling that people say keep to the rules and regulations, but in all
honesty, there’s no rule as to what height of hair should be kept. It
just says keep a low cut and the boys always keep their hair well. The
management is just passing on its anger as a result of the embarrassment
it faced in FT the previous day since some students didn’t bring
Bibles. It is sad and even more sad because I feel nothing will be done
about it,” he wrote on his Facebook wall.

A woman, who claimed to
have studied Mass Communication at the school, Chimdimma Christiana,
said some of its rules and regulations did not justify the vision of the
school.

Another ex-student, Daniel Uzor, posted on Facebook that
although he was proud of being a graduate of the university, he was
disappointed at the shaving of the students’ hair.

“I don’t see
how keeping of hair affects religious values or academic performance. No
one is saying you shouldn’t uphold your values, but please, at least,
accord people respect and dignity,” he added.

One Mo’Miss @Modupeee also tweeted that shaving people’s hair without their consent was an assault.

A
Facebook user, Chidiebere Elendu, said the university’s management
should be cautioned by the relevant authorities, noting that the school
did not factor in health implications of using an “unsterilised” clipper
for all the affected students.

He said, “What excuse will the
school authorities give should these students contract some
transmittable diseases from the barbing exercise? Sometimes, I can’t
stop wondering if the same Christianity being practised today was the
same as the one Christ and the apostles preached.”

However, some
people defended the school’s action, saying the students were to blame
for not complying with the rules and regulations.

One of them, Yaks, @Yaksnagu, said the students had no reason to complain as they were aware of the school’s rules.

He said, “A person should not be heard complaining about an injury to
him dealt by another person, where that person volunteered himself to
the risk of harm and knew that the injury dealt was a likely consequence
of their dealings.”

One Kanye Waste, @iKantWaste, in his tweet, also defended the school, saying its action had nothing to do with Christianity.

“Those are their rules and regulations, and it is not by force to attend the institution,” he added.

Efforts
to get the reaction of the school proved abortive as an official,
Emmanuel Igban, who used to speak for the institution, said he was not
in the position to comment on it.

He, however, promised to send the contact of the spokesperson to The Punch but had yet to do so as of press time.

Why it Is (Sometimes) Good for Man to Be Alone