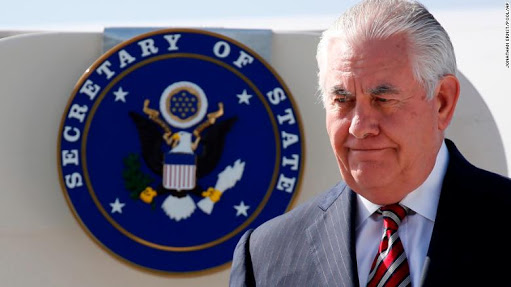 Rex Tillerson, until yesterday the United States Secretary of State, had
to cut short his trip to Africa because of developments at home. He had
been fired by President Donald Trump. Tillerson, whose replacement has
been named, will bow out of office on March 31.

The man is unaware of why President Donald Trump asked him to resign as United States Secretary of State.

Under Secretary of State for Public Diplomacy and Public Affairs, Steve
Goldstein, said in a statement on yesterday the the former Secretary of
the State did not speak to Trump about the development.

“The
Secretary did not speak to the President and is unaware of the reason,
but he is grateful for the opportunity to serve, and still believes
strongly that public service is a noble calling,” Goldstein said.

Trump,
however, said that he and Tillerson disagreed on many things, including
the Iran nuclear deal, following the announcement of the top diplomat’s
departure from the high-ranking position.

The U.S. President
said: “We got along actually quite well, but we disagreed on things.
When you look at the Iran deal, I think it’s terrible, I guess he thinks
it was okay.

“We wanted to either break it or do something and he felt a little bit differently. So, we were not really thinking the same.”

Trump
added that he made the decision to fire Tillerson by himself,
announcing that the Central Intelligence Agency (CIA) Director, Mike
Pompeo, will replace Tillerson.

“Mike Pompeo, Director of the
CIA, will become our new Secretary of State. He will do a fantastic job!
Thank you to Rex Tillerson for his service!” Trump wrote in a Twitter
message.

A White House official said Trump wanted to make the
change at the State Department ahead of expected talks with North Korean
leader Kim Jong-Un and trade negotiations.

Trump reportedly asked Tillerson to resign on Friday while the secretary was in the middle of a diplomatic trip to Africa.

Tillerson, who was in Abuja, on Monday cut his trip short by a day and returned to Washington, DC.

Trump plans to nominate Gina Haspel, the CIA’s Deputy Director, to take over for Pompeo.

Haspel would become the first female director in the history of the intelligence agency.

Haspel
served as a clandestine officer with the CIA in 2002 in Thailand and
oversaw the torture of two terrorism suspects and destruction of
videotapes documenting that torture, according to a Senate Intelligence
Committee report on CIA torture.

Both Pompeo and Haspel will need Senate confirmation before starting their new positions.

Amazing Ways Technology Has Changed The Way You Travel