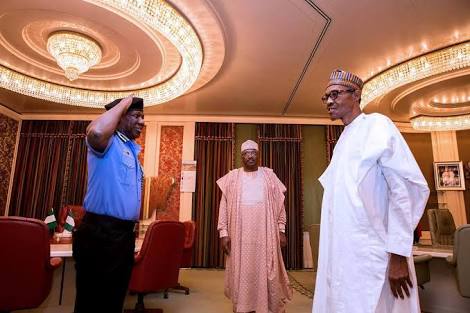 President Muhammadu Buhari told a town hall meeting in Makurdi on Monday
that the Inspector-general of Police, Idris Ibrahim has some query to
answer as to why he violated his order to relocate to Benue state,
following the killings of 73 villagers by herdsmen.

The
killings happened on New Year’s Day and amidst national outrage
President Buhari on 9 January, ordered Idris to relocate to Benue state.

President
Buhari was told by Governor Ortom that Idris did not spend even 24
hours in the state, as he moved to neighbouring Nasarawa state, thus
violating President Buhari’s order.

President Buhari was surprised that Idris breached his order.

NAN
reports that Mr President said he would ask Idris to explain why he
observed the order in the breach, on his return to Abuja.

“What I
did was to call him and give him (a) directive. And I didn’t know he
moved here (Benue State) and didn’t spend (time) and then move to
Nasarawa. It’s only now that I am knowing that. But I know I dispatched
him here,” the President said.

“At every level, you have to be
loyal to people below you. Whether that person is loyal to you or not is
totally a different thing,” President Buhari said.

Why I Exposed How Much We Earn As Senators – Shehu Sani