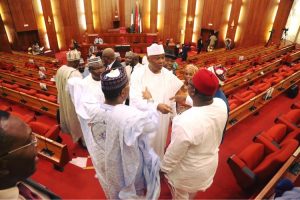 Efforts of the leadership of the All Progressives Congress (APC) to
reconcile the Executive and the Legislative arms of government, over
plans to override President Muhammadu Buhari’s veto of the Electoral Act
(Amendment) Bill, 2018, may have suffered a setback as most Senators
insist on going ahead with their plan.

It was
gathered at the weekend that after the rapprochement of the Senate APC
caucus with the APC leadership, last week, Senators loyal to Senate
President, Bukola Saraki appear resolute in going ahead with the
override of the president’s veto.

Daily Sun learnt that APC
senators and their colleagues in the PDP, who are rooting for the
override, have closed ranks. It was gathered that PDP leaders in the
Senate have met with key loyalists of Saraki, who are spearheading the
move.

An APC senator from the North East represented Saraki’s
side at the meeting, while a ranking PDP lawmaker from the South East
represented the PDP.

APC senators, who were hitherto undecided,
following recent meetings, have joined forces with the Like Minds Forum
loyal to Saraki. Their reason, it was gathered, was borne out of
threats, allegedly from governors of their respective states not to
allow them secure return tickets to the Red Chamber in 2019, if they
support the move to override Buhari’s veto.

Last week, the Oyegun-led NWC met with the APC caucuses in the National Assembly, in a bid to halt the proposed plan.

Buhari
had rejected the bill on the excuse that his assent would infringe on
the constitutional powers of the Independent National Electoral
Commission (INEC) and that signing the bill will be make the National
Assembly appear as if it legislating for the states on local
government-related issues.

However, in a memo sent to the Senate
President by the the National Assembly’s Legal Department, it faulted
the president’s three reasons for rejecting the bill.

The legal department, in the memo, gave the National Assembly a clear go ahead; if it wanted to override the president’s veto.

Regardless,
Senate spokesman, Aliu Sabi Abdullahi, in a chat with Daily Sun on
Sunday, declined to speak and insisted that “the issue has not been
officially table before the Senate for any discussion.”

Conversely,
the president’s supporters in Leaders of Parliamentary Support Group
(Senate) were unreachable, as at Sunday night. Telephone calls from this
newspaper were unanswered.

Meanwhile, sources close to Saraki
revealed that his Chief of Staff, Dr. Hakeem Baba-Ahmed, has been
queried for his involvement in a meeting of northern politicians which
held in Arewa House, Kaduna, at the weekend.

The sources insisted
that although Baba-Ahmed was at the meeting, Saraki “was not privy to
the decision of the meeting,” regardless of the fact that “Baba-Ahmed
read the communique.

“The senate president, just as other members
of his team, was surprised to see a television news report where
Baba-Ahmed was presented reading the communique.

“In fact, the senate president has verbally queried Baba-Ahmed and members of his media team.

“Saraki’s
media team immediately had a meeting to look at the implication of the
chief of staff taking on such a role, which can be misinterpreted.”

Another
source said “the conclusion of the media team was that Baba-Ahmed has
always acted in similar capacity for key northern groups, long before he
joined the senate president’s staff, except that in the present
situation, his role could be misconstrued and will create some public
relations challenge for the team.”

5 Mistakes Some Make When Trying To Lose Belly Fat