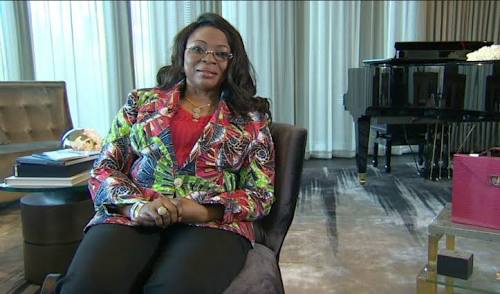 One of Africa’s richest women, Mrs. Folorunsho Alakija, has pledge to
continue to make positive impact on lives through her foundations and
other means available to her.

Mrs. Alakija, the Vice Chair of
Famfa Oil, a Nigerian oil exploration company with a stake in Agbami oil
field, a prolific offshore asset, is classified by Forbes as having a
net worth of $1.6 billion.

She spoke during a visit to The Nation headquarters in Matori, Lagos.

She was received by a team led by General Manager (Training and Development) Soji Omotunde.

Mrs.
Alakija, who is also the Founder of Flourish Africa, a non-governmental
organisation empowering widows and orphans, said identifying one’s area
of strength, hard work and faith in God would always guarantee success.

She
said: “I cannot do everything. But we have put in a platform meant to
encourage women in all areas to build a better society. It is in
togetherness and hand-holding that we can excel.”

According to
her, Flourish Africa is an idea conceived to create a community of
like-minded women, who share their individual experiences and encourage
each other to be who God created them to be.

She said that
Flourish Africa is a platform designed for women, by women, to empower
both young and old to flourish. She said the project is a series of
initiatives designed to help women in all aspects of their lives.

Mrs.
Alakija, who is also founder of the Rose of Sharon Foundation, a
non-governmental organisation with focus on helping widows and orphans,
has been an advocate of empowering women for many years.

“As
human beings, we must all be our brothers’ keepers. We can all do
something that can make a difference in the lives of our neighbours,”
she said.

She said through fulfilling that mission, “which God
has placed on my heart as my purpose, I realised that there needs to be a
greater drive to pull together not only widows but women of all ages to
encourage one another and help lift each other up to achieve our
greatest and fullest potential”.

According to Mrs. Alakija,
Flourish Africa, is creating an online community where young women can
engage in intellectual dialogue to uplift, empower, and inspire each
other no matter what age.

She said young millennial women today are the country’s future.

“Through
fulfilling that mission which God has placed on my heart as my purpose,
I realised that there needs to be a greater drive to pull together not
only widows but women of all ages to encourage one another and help lift
each other up to achieve our greatest and fullest potential,” she said.

“The
Nation has done very well. We thank you for all the success you have
been able to achieve. I want to thank you for the progress made in the
country in getting the news out there. I want to solicit more of that.
It is in rubbing each-others back that we can make progress,” she said.

Mrs.
Alakija, who described herself as plain and simple, said the Flourish
Africa came on board because of the need to empower women in Africa and
Diaspora.

She said that Flourish Africa has come to encourage the
women, to be the best they are created by God to be. She said the group
has in the past held conferences to get its message to the world, and
will be holding another conference in July this year in Lagos.

She
said that the foundation has supported 129 students, who are children
of widows that have passed out of university education. It has also
granted scholarships to 1,366 widows’ children and supported the orphans
with stipends, accommodation and scholarships.