by Tony Orji
in News
Reading Time: 3min read
1
Share on FacebookShare on TwitterShare on Whatsapp 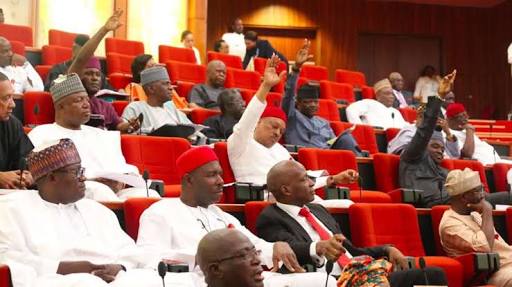 *Bill ‘infringes on Constitution’
There was anxiety in
the Senate and the House of Representatives yesterday following
President Muhammadu Buhari’s rejection of the bill on the reordering of
the 2019 election sequence.

The Senate and the House on February 14 adopted the conference report of the Electoral Act amendment.

But the President, in a correspondence to the lawmakers – which was read on the floors yesterday – declined assent to the bill.

“Some of my reasons include the following:

“A.The
amendment to the sequence of elections in Section 25 of the principal
act may infringe upon the constitutionally guaranteed discretion of the
Independent National Electoral Commission (INEC) to organise, undertake
and supervise elections provided in Section 15(A) of the third statue to
the Constitution;

“B.The amend to Section 138 of the principal
act to delete two crucial grounds upon which an election may be
challenged by candidates, unduly limits the rights of candidates in
elections to a free and fair electoral review process;

“C. The
amendment to Section 152(3)-(5) of the Principal Act may raise
Constitutional issues over the competence of the National Assembly to
legislate over local government elections.”

He read the letter at the plenary convened after the closed session. Thereafter, there were no comments.

After Speaker Yakubu Dogara read the letter in the House of Representatives, there were also no comments.

This
is the second major bill that the President has declined to sign in the
last one month, the first being the Peace Corps Bill.

It was
learnt that at the executive session, senators resolved to seek advice
from the legal department on the issues raised by President Buhari for
withholding his assent to the amendment of the Electoral Act Bill.

A source said that the next line of action would largely depend on the advice from the legal department.

The
source told The Nation: “If the advice turns out that the reasons given
by President Buhari to decline assent on the Bill were not cogent
enough, we will surely mobilise to override the President.”

Some
senators, he said, “are already of the view that we should go ahead and
override the president.” The Senate requires 74 members to take that
step.

Senator Enyinnaya Abaribe (Abia South) told reporters that
the Senate would do “the needful” because it believed that what the
National Assembly did was in the best interest of the country.

He
said: ”The President’s action was expected. Many of us felt it (the
sequence) should not be altered. Many APC members are not for
reordering of elections clearly this time around and there are
sympathisers in the PDP.

“We felt that it will be money-guzzling
and where will the funding come from? The position of the Senate on the
development would soon be made known.

“The issue of veto is not
as smooth as the people say it. If there is a stalemate on any matter,
it will be put into vote. It is then everyone will answer his father’s
name.”

Following the bill’s passage, some senators, led by Senator Abdullahi Adamu, stormed out of the chamber to fault the amendment.

The group of nine senators also claimed that President Buhari was the target of the amendment and vowed that it would not stand.

Some commentators have also risen to fault the amendment and threatened to challenge it in court.