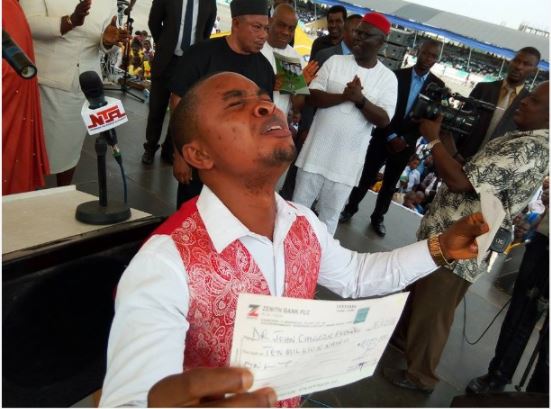 Chigozie Ekenze, the best graduating student at the 2016 combined
convocation ceremony of Imo State University IMSU – has been given
another reason to smile as the academic expense, being Thirteen Million
Seven Hundred Thousand Naira (13,700,000) has been released by Governor
Rochas Okorocha to enable him proceed for his Post Graduate Program in
London immediately.


Ekenze who lost his father shortly after gaining
admission to study Optometry in Imo State University was threatened to
withdraw for lack of funding as his mother’s vegetable trade could not
sponsor his education.

After becoming governor in 2011, Rochas
Okorocha declared free and compulsory education from primary to
university and that would rekindle the spark of greatness in the young
doctor to soar to greatness.

Man hides $23,000 in birthday cake, smuggles it into Nigeria

Don’t Let Worry Deny You Your Right To Happiness