ASUU Strike: The real language of the Nigerian government

by Tony Orji
in Entertainment
Reading Time: 3 mins read
A A
0
Share on FacebookShare on TwitterShare on Whatsapp 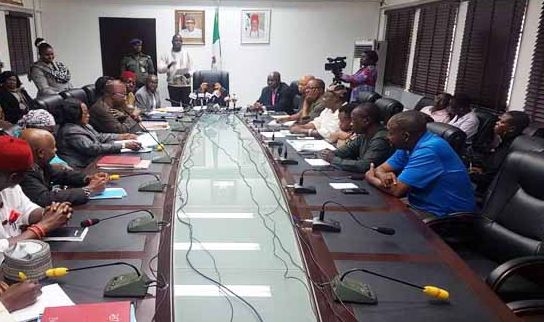 Written by:
Egbeolowo-Olaitan It would have sounded unpleasant to the ears of they that
heard Albert Einstein the day he said, “INSANITY IS DOING THE SAME THING OVER
AND OVER AGAIN, BUT EXPECTING DIFFERENT RESULTS”.
We keep under-funding the education sector and yet, we are excepting
miracle in the same sector being underfunded. Then I ask:
How can a productive graduate be produced from this rotten system?
I think Albert Einstein was looking at this direction when he gave his own
definition of insanity.
In fact, if I’m to contemplate and decipher whether
there is a difference between Nigeria’s pre-colonial era and post colonization,
then i would say that there is something wrong with us inside our black skin and
we were better off when the white man ruled. Despite the role of education in
national development, Nigeria as a nation, keeps deriving pleasure in
underfunding her education sector. It shows that we have misplaced our
priorities as a nation. Nigerian leaders are always eager in attending to
needless issues over the needful ones.

After many outcries on the
importance of education and the 26% benchmark as recommended by the UNESCO for
developing countries, the reverse seems to be the case in the attitude of the
Nigerian government towards education. What this implies is that, for decades,
the country’s budget for education has been less than the 26% benchmark
recommended by the United Nations for developing countries.


This implies that our education system is in shambles and our schools
are underfunded.

So all of these put together have contributed to the decline in the
quality of our education. It is just a shame that hardly a 4yr calendar goes by
without Academic disruption. Therefore, this incompetency of the Federal
government is an insult to our citadel of learning because our tertiary
institution is the cradle of the society.

The thing is just that when
the cradle is rendered useless it reflects on the nation as a whole,that is why
we can’t compete with our counterparts globally. That is why most of the
Nigerian parents from the bourgeoisie class prefers to enroll their children
abroad rather than enrolling them in this bottomless pit.


Furthermore, it is not surprising that the irresponsible government
officials patronizes foreign universities while dumping the ivory towers in
their own country into the bottomless pit.

This pontificates that our political leaders have no moral compass or a
distorted moral compass such that I’m afraid they can’t make it to the parking
lot on their own. Many Nigerians are anxious due to the industrial action
stimulated by ASUU, they want to know when the strike will come to an end, yet
the FG are lackadaisical in their negotiations. They want to know what the
future hold for the dying state of the education sector.

If not, what is it to fund an important sector such as education?
Instead of that, what we have is the height of capitalism ruling around. Then
the question to ask is, how many Nigerians can afford three square meals a day,
not to talk of enrolling in a private university?

According to research,
the first and perhaps the greatest challenge facing Nigeria and making it
difficult for good quality education that is capable of bringing about
sustainable development is inadequate funding by federal, state and local
governments.


Also, in 1997 and 2000 statistics show that federal government
expenditure on education was below the 26% of national budget as recommended by
the UNESCO.

The most disheartening part of this strike is that, most students would
become ready tools for all sort of activities in their respective environments,
just because they are jobless in one way or the other.
Also, it would be a
maddening crescendo if billions of naira could be used on eating snacks alone
and yet, a whole sector is in shambles under the same adminstration.

The
Yorubas would say “OJU TO MAA BANI KALE, KO NI TI AARO SE IPIN”. The eyes that
will serve one until old age won’t be rheumy in one’s youthful years. Could it
be that the future of the Nigerian state has been sabotaged? Could it be that
Nigeria is heading for better days? Where does the hope lies? Well,Whether or
not Nigeria is heading for better days remains to be seen.

Seriously, If we continue threading on this thin path, then I fear Nigeria
is heading for a cloud of apocalypse.

– Egbeolowo-Olaitan is a student of Tai Solarin
University Of Education (TASUED), where he studies primary education/political
science. A Sapiosexual Writer And Orator….
Tags: EntertainmentInspiration
Previous Post