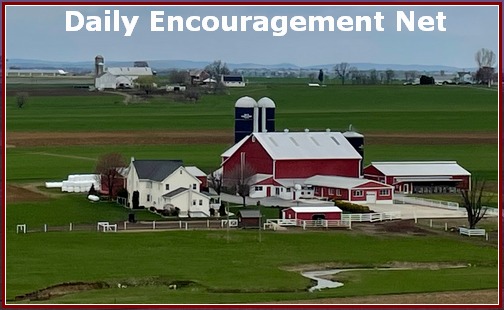 “A King-Sized Blessing”
Our great King always and forever and ever is worthy to receive “honor and glory”. Let us faithfully praise and live for Him today.
“Now to the King eternal, immortal, invisible, the only God, be honor and glory for ever and ever. Amen” (1 Timothy 1:17).
The “complimentary close” is the term used for the word (such as “Sincerely”) or phrase (“Best wishes”) that conventionally appears before the sender’s signature or name at the end of a letter, email, or similar text. It’s a great place to consider writing something with a spiritual punch. Since the very beginning I have used “Be encouraged today” as the complimentary close for our daily message.
We have received many spiritually edifying complimentary closes in messages such as, In His grip, Joyfully in Christ, In Christian love, Because of Calvary, Standing on His promises and many other closures that we identify with as believers. Tony Perkins, who leads a ministry contending for Biblical values, simply concludes his letter with “Standing” (Ephesians 6:13). 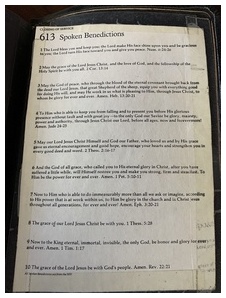 A benediction in a church service is similar to a complimentary closing and we sure are blessed when a pastor shares a Scriptural benediction. It adds a sacred solemness to the conclusion of a service.
During the many years I served as a pastor I usually concluded the service with a Scriptural benediction and had a list of them pasted to the back flyleaf of my Bible. For the record these were from “The Hymnal For Worship and Celebration” and I also had a list of “Spoken Calls To Worship” pasted to the front flyleaf.
Moses and Jackline are readers from the South Sudan who periodically comment on our messages. Recently she wrote us and in her complimentary close she wrote, “A king size blessing”. We can be assured the blessing of our King will be king-sized! Now that got me thinking about the blessing of being a child of the King of kings and Lord of lords. It’s truly a king-sized blessing!
Today let us consider a benediction that Paul used early in his first letter to Timothy. Although benedictions are usually at the end of his letters Paul may have been in a spirit of praise and just couldn’t wait till the end.
Spurgeon writes, “Paul could not help this outburst of praise. He must put in a doxology. When he remembered his own conversion and pardon, and his being entrusted with the ministry of the gospel, he was obliged to put down his pen, and lift up his voice in grateful thanksgiving to God. So may it be with us, as we remember what great things the Lord hath done for us!”
“Now to the King eternal, immortal, invisible, the only God, be honor and glory for ever and ever. Amen” (1 Timothy 1:17). We might call it today a King-sized benediction.
Let’s consider this brief benediction directed to the King focusing on several of His immutable qualities.
Our King is an eternal King. He is without beginning and without ending. He always was and forevermore shall be. Jeremiah writes, “But the Lord is the true God; He is the living God and the everlasting King” (Jeremiah 10:10). Actually I wonder if Paul might have had this verse in mind when he wrote today’s text!
Our King is an immortal King. He is incapable of dying!
Our King is an invisible King. “No one has seen God at any time; if we love one another, God abides in us, and His love is perfected in us” (1 John 4:12).
Our King is the only God. There many small case “gods” in the world but only one true God. Jude, in the benediction ending his brief letter writes, “To the only God our Savior, through Jesus Christ our Lord, be glory, majesty, dominion and authority, before all time and now and forever. Amen” (Jude 1:25).
Our great King always and forever and ever is worthy to receive “honor and glory”. Let us faithfully praise and live for Him today.
Be encouraged today, (Hebrews 3:13)
Stephen & Brooksyne Weber
Previous Post

Apply Now! Vacancy for the post of a Finance Assistant at WHO office, Abuja