by Tony Orji
in Sports Update
Reading Time: 23 mins read
A A
0
Share on FacebookShare on TwitterShare on Whatsapp Trailing 2-1 in the shootout, Courtois took Chelsea’s second kick but failed to equalise, blazing over, before club-record signing Morata fired wide.
That handed Arsenal the initiative, allowing Alex Oxlade-Chamberlain to score before Olivier Giroud netted the decisive strike to secure the Shield, and a timely boost ahead of their Premier League opener against Leicester on Friday Night Football. Alexandre Lacazette was the only new signing in the starting line-ups, with focus on those absent as much as those playing. Alexis Sanchez was present as a spectator, as was Eden Hazard but Diego Costa remained in exile.
Wembley was united ahead of kick-off as the victims of the Grenfell Tower fire, whom the proceeds of the Community Shield will be donated to, were remembered with a touching minute’s silence. 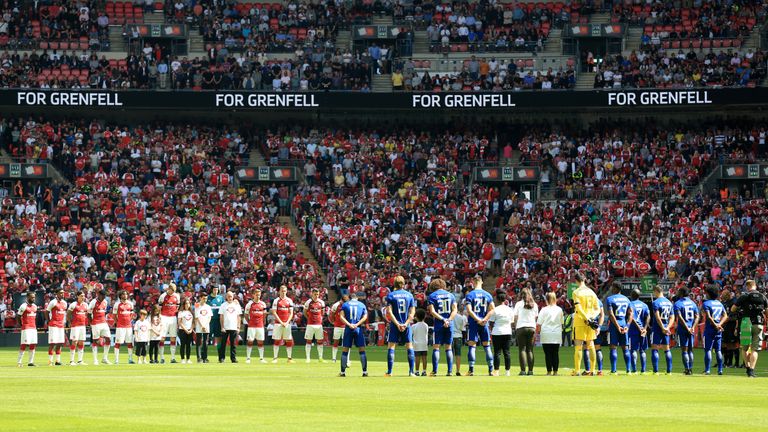 Both teams stand to remember the victims of the Grenfell Tower fire
Alex Iwobi’s direct running twice forced Courtois to be alert early on, while Danny Welbeck headed at the goalkeeper, who was beaten by Alexandre Lacazette only for the striker to see the ball rebound off the post on 22 minutes.
Per Mertesacker had to go off on the half-hour mark after being struck by Gary Cahill’s flailing arm in the Arsenal box, with summer signing Kolasinac replacing him.
View image on Twitter 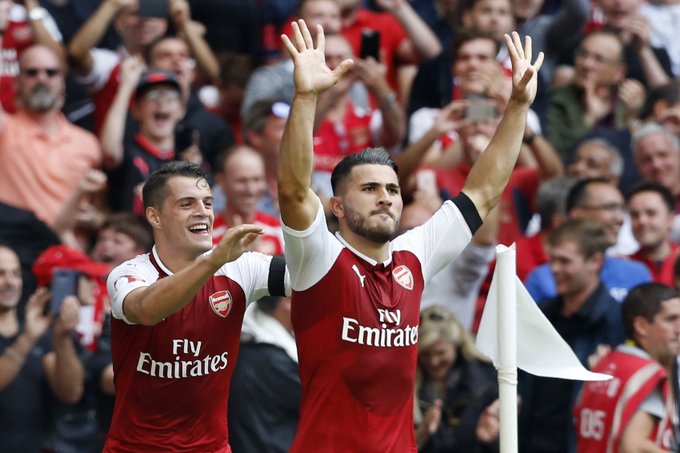 Twitter Ads info and privacy
Chelsea’s first attempt of note came on the counter-attack on 35 minutes as Pedro received a fine cross-field pass from Willian and drew a fine save from Petr Cech at his near post.
Two minutes later, Willian was adjudged to have dived in the area after Hector Bellerin’s mis-control, although replays showed there to be contact before the Brazilian clipped his own heels. Moses wheels away in celebration after scoring the opener
Chelsea took the lead within moments of the restart as Cahill returned a clearance back into the Arsenal area where Moses was lurking, and he chested and volleyed beyond Cech.
The goal promoted a celebratory dive from Nigerian, a nod to his costly dismissal for simulation in May’s FA Cup final defeat to the Gunners. 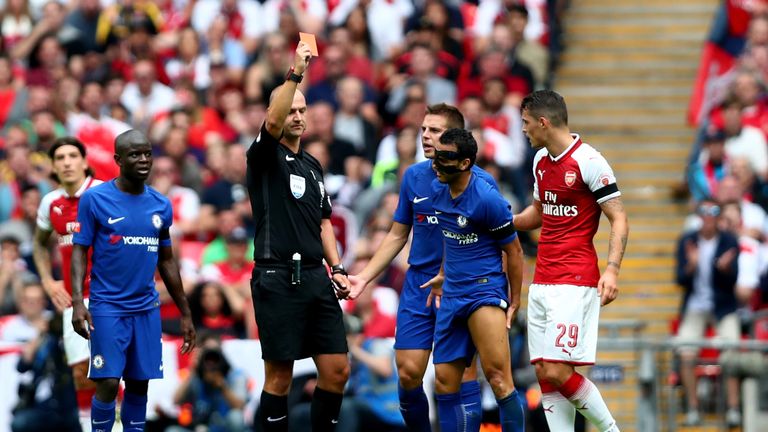 Referee Bobby Madley issues a straight red card to Chelsea forward Pedro
Pedro was sent off after catching Mohamed Elneny on his Achilles 10 minutes from time and Arsenal scored from the resulting free-kick as Kolasinac headed Granit Xhaka’s cross beyond Courtois from close range.
Morata, brought on with 16 minutes remaining, headed Cesc Fabregas’ late free-kick wide from an offside position before Arsenal claimed their second Wembley victory over Chelsea in 10 weeks at the shootout.

Man of the match

Sead Kolasinac – All the focus ahead of kick-off was on the big-money summer acquisitions Antonio Conte and Arsene Wenger had brought to their respective clubs this summer. But, instead, it was a man who arrived for nothing that caught the eye. Sead Kolasinac celebrates his equaliser against Chelsea
Brought on in place of the injured Mertesacker, Kolasinac endeared himself to the Gunners faithful with a robust performance, littered with energetic runs from deep and capped by the equaliser.
Tags: Sports Update
Previous Post

I will love to see Buhari in London – Fayose