by Tony Orji
in Inspiration, Lifestyle, News
Reading Time: 4 mins read
A A
0
Share on FacebookShare on TwitterShare on Whatsapp 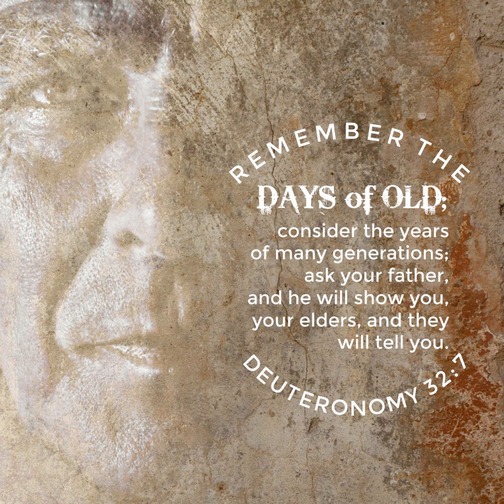 “Remember the days of old; consider the generations long past” (Deuteronomy 32:7). “I will sing of the mercies of the LORD for ever: with my mouth will I make known Thy faithfulness to all generations” (Psalm 89:1). “One generation will commend Your works to another” (Psalm 145:4).
In 1977, a year after we married, a TV miniseries came out titled “Roots” which is based on Alex Haley’s family history.  It’s likely that most in our generation saw this series as it was immensely popular and prompted much national discussion at the time.

The story begins in Africa where Kunta Kinte is sold into the slave trade after being abducted from his African village, and is then taken to the United States. Kinte and his family in subsequent generations observe notable events in American history, such as the Revolutionary and Civil Wars, slave uprisings and emancipation.
It is a very moving series for many reasons but what impressed me most was the way the oral history of the family had been carefully passed down from generation to generation. Each generation had very purposely passed on the family history to the next and over 200 years the story goes on and I assume still does.
In our day there is a renewed interest in genealogy and exploring our roots. Some in my family have pursued this and I glean from what they have discovered through research and in some cases DNA. 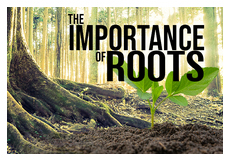 However there really wasn’t much of an oral history passed on to me. My grandpa on my mother’s side was the son of a German immigrant who came to the US in the late 1850’s (as best I can determine). I have no idea about anything before this. I know even less about my other ancestors. I don’t recall it being passed on but then frankly maybe I didn’t listen or wasn’t interested! I would be curious to hear from any who have had an experience similar to Alex Haley and know about their distant ancestors from a carefully passed on oral history, especially our African readers.
This is Memorial Day weekend here in the USA. Memorial Day’s origin dates back to the period following our Civil War in the 1860’s and is primarily a day of remembrance of those who died in that war, but later it included all the wars that have followed. In addition to observing its original intent it’s also a good time to reflect on our past. Yesterday in our church we remembered Christ’s death in the communion service. 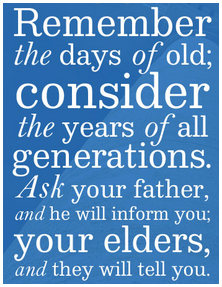 Moses, in his final message prior to his death, calls the people to “Remember the days of old; consider the generations long past“. That is so necessary for each generation and is increasingly lacking in this modern age with so many living only for the now and having no interest in the past or even holding a disdain for it.
C.S. Lewis used the term “chronological snobbery” to describe the tendency to devalue any generation but your own. It asserts that “the thinking, art, or science of an earlier time is inherently inferior to that of the present, simply by virtue of its temporal priority or the belief that since civilization has advanced in certain areas, people of earlier periods were less intelligent.”
From creation an oral history had been passed on from generation to generation until the time of Moses who is the author of the Pentateuch (first five books of the Bible). This  long period covers the time from creation and the origin of their national identity (children of Abraham, Isaac and Jacob) to Moses which would be several thousand years.
Moses lived about 3,500 years ago and I believe his words are still very appropriate for the people of God today. We all need to “remember the days of old; consider the generations long past“.
Be encouraged today, (Hebrews 3:13)
Stephen & Brooksyne Weber
Tags: INewsInspiration
Previous Post