by Tony Orji
in INews, News, Publications
Reading Time: 2 mins read
A A
0
Share on FacebookShare on TwitterShare on Whatsapp 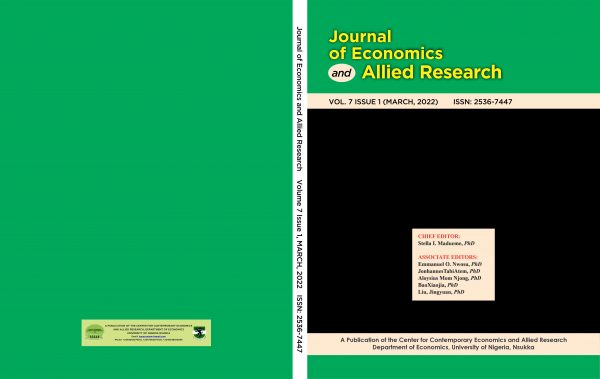 ABSTRACT
While efforts and policy have been pursued towards adapting to and mitigating against climate
change towards achieving sustainable development, the role of gender has not been given the
required attention. This study is aimed at determining the impact of closing the gender gap on
the mitigation of climate change. The panel least square estimated method was employed
spanning from 2008 to 2020 and on some countries in Sub-Saharan African. Agriculture nitrous
oxide emission as a % of total emission (AN2O) and CO2 emissions from gaseous fuel
consumption as a % of total (CO2FE) were used to capture climate change. Various measures
of gender gap showed a substantial impact on climate change. While female tertiary enrolment,
female to male labour participation ratio, and government national expenditure % of GDP were
negatively related with agriculture nitrous oxide emission as a % of total emission and
agricultural sex employment ratio had a positive relationship with climate change. The study
thus, advocates among others the increase of females in the engagement of non-agricultural
activities as well as an increase in female tertiary education to mitigate climate change