by Tony Orji
in INews, Inspiration, News
Reading Time: 4 mins read
A A
0
Share on FacebookShare on TwitterShare on Whatsapp 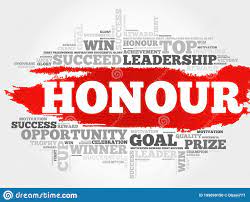 The worth of a man is never hinged on the certificates and awards earned. Neither is it centred on the heavy bank accounts and number of Rolls Royce that greets his compound. No, it is not! Rather, there is a system God places in a man that makes a generation look for him. There is a system God activates in a man that causes him to be relevant in the now, in the future, and forever. That system is called honour. But very few, even as believers, know how to activate it.

First of, what honour means to you may mean something else to another, just like the saying one man’s meat is another man’s poison. Therefore, we shall see what God sees honour as. Honor is a state of regard and value of a person. It is the worth of a man that in turn sparks respect and recognition from other men. In other words, it is a symbol or evidence of distinction.

God never created man to be dishonored. In the original blueprint of the courtroom of The Trinity, man was designed to walk in glory, and dominion, for eternity. However, man’s fall caused by sin led to his dishonorable state. But, there is good news for you and I! This is not for long as The Christ left his seat of honour and decided to die for the world (John 3:16) so that we might get honour (Rev 5:12), and be restored back to our state as Honourables. Now, you know it is God’s will for you as His child to live and walk in honour, then you must live up to His expectations. But how can you activate the system called honour in your life?

There was a man called Joseph who was dishonored (Genesis 39:20) because of an evil plan by his master’s wife against him. But one thing was common in the life of this young man which is not common in the life of many young folks seeking to be honored among and above their peers. Joseph, had the presence of God. The Bible said: “… the LORD was with Joseph” (vs 2). The Lord cannot be with you if you don’t honour Him. So, the first way to activate this system of honor is to honor God first.

God said: “…Be it far from me; for them that HONOUR ME I will honour, and they that despise me shall be lightly esteemed” (1 Sam 2:30). Alas, a very simple secret to being honoured in life: simply honour God. Putting God first in everything you do is simply honoring Him (Matthew 6:33). Honour Him with your wealth (Proverbs 3:9). When you honour God, He will honour you with His presence, is that not lovely? This means there is no place you’d go to that men won’t honour you because you honoured God. Even Joseph in prison was honoured (Genesis 39:21-23). After today, I see God honoring you in Jesus name. Amen. Only learn to honour God in all that you do.

Another code for the activation of The Honour System is to honor men above yourself. The honour you accord to others is also reflected in your life. That is to say the way you honour men is the way men will also honor you. It’s the law of sowing and reaping. Honouring men is another way of humility. Would you be humble enough to place others above yourself, to honour them? If no is your answer, you are not ready to be honored then.

The Bible says in Prov.15.33 that “… before honour is humility.” Peter also confirmed this in one of his New Testament books that we should learn to “Honor all men” (1 Peter 2:17a). Honour is like a ladder, it is how much you value others that determine how far you climb in life. Remember God resists the proud but gives Grace (honour) to the humble (James 4:6). When you humble yourself before Him, He will lift you up (James 4:10), and that my dear friends is honour!

Honor is a currency in the school of the spirit that can get you whatever in life. A little show of honour can open doors for you, start up big contracts, take you where your steps ordinarily shouldn’t have gone to, build bridges for your destiny and children and generation yet unborn. Learn to honour men, whether small or big, rich or poor, tall or short. Men are men, not because of what they receive, but how much they give. Give honour today!

In conclusion, Jesus was to ride into Jerusalem as prophesied already, and he had need of an ass (Matt 21). He requested his disciples to get one. Bear in mind that this ass was not known by anyone, it was not honoured. But the moment Jesus rode on it, men began to drop their dresses and tree branches on the ground for Jesus to ride through, on it (vs 8). A donkey that was never known became known because Jesus sat on it. The same thing happened to the Apostles of old. They were hiding in obscurity but the moment the Holy Ghost sat on them as cloven tongues of fire (Acts 2:3), the people could not recognize them. They said: “Behold, are not all these which speak Galilaeans?” (verse 7). A new wave of honour swept over them. Do you want to be honored today? Allow Jesus and the Holy Ghost sit on your life today. Bow your head and in a moment confess your sins genuinely to God and receive forgiveness.

If you said that prayer, welcome to God’s family. It is the first honour that will attract every other honour. Remember that the moment Jesus came down that donkey, it was never heard of again. If you let Jesus come down your life, you will never be honoured again. So, hold on tight to your faith and Jesus. You are honoured!