A Good Yield (What kind of Soil are you?)

“But others (seed) fell on the good soil and yielded a crop, some a hundred, some sixty, and some thirty times as much” (Matthew 13:8). “And the one on whom seed was sown on the good soil, this is the man who hears the word and understands it; who indeed bears fruit and brings forth, some a hundredfold, some sixty, and some thirty” (Matthew 13:23).
Several weeks ago we mentioned how the farmland across from our home had been sold and the new owner was making some changes to the property. Most notably to us is that the trees that lined a trail we often walked on have been removed, which was somewhat a disappointment. Ester is also very disappointed because the treeline enhanced her sunset photos that she frequently takes. 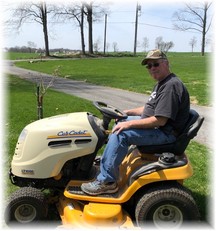 But we are grateful the trail, which is actually a township right of way, will remain a linear park for walking. It will be sown with grass and maintained by the township which is actually an improvement. I overworked my Cub Cadet garden tractor in previous years trying to mow the weedy, rocky and exposed root path! (The photo shows Ken, a friend who had just serviced the tractor.)
This has also changed our view but actually expanded the visible horizon so we see more distant farms that were previously blocked by the trees. Other trees directly across the road from our home have been removed as well. In fact these include those seen beyond my garden tractor in this photo. Several were diseased but others were suitable for the saw mill. We will have a lesson on these trees tomorrow.

The farmland has a designation of being preserved and Mike, the farmer who bought the land assured us it will continue to be used for agriculture. In regard to the decision to remove the trees he explained how the line of trees on each side of the trail diminished the crop yields due to competition for the soil’s nutrients. The roots extend out into the soil some 100 feet and absorb many of the nutrients that would otherwise be used by the crop (usually corn).
As a non-farmer I see a field of corn and make a judgment of crop health based on how green or how tall the corn is and other factors. These may be important but the farmer is mostly concerned with yield, usually measured in bushels per acre. With modern harvesting equipment the farmer has an instant report of this yield even as he harvests.
Ancient farmers were concerned with yield which is expressed in the parable of the sower.
Jesus contrasted four different types of soil conditions in this parable. He taught that the good soil “yielded a crop, some a hundredfold, some sixty, and some thirty” (Matthew 13:8). Jesus explained in this parable that the seed which fell on the good soil is like “the man who hears the Word and understands it; who indeed bears fruit and brings forth, some a hundredfold, some sixty, and some thirty” (Matthew 13:23).

Good soil is a blessing in agriculture, home gardening, and in the heart that “hears the Word and understands it”. May the Lord help us all to have hearts that are like the good soil that effectively nourishes the seed of God’s Word in our lives so that we produce a good crop yield!

Jesus has Risen- Death Could Not Hold Him!

For Such A Time As This