Buhari Gets NJC Recommendation To Approve Tanko As CJN 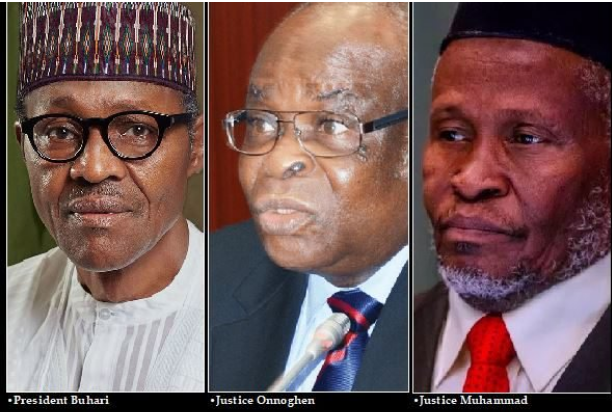 With the recommendation of the National Judicial Council, the coast
seems clear for Acting Chief Justice of Nigeria (CJN) Ibrahim Tanko
Muhammad to mount the saddle as CJN. President Muhammadu Buhari is
likely to accept the NJC’s recommendation that Justice Muhammad should
be CJN.

But Buhari is said to be weighing whether or not to accept the NJC’s
recommendations on the suspended Chief Justice of Nigeria ( CJN),
Justice Walter Onnoghen.

Buhari, according to The Nation, who had a meeting with Vice President
Yemi Osinbajo on the issue before flying out to Jordan yesterday, is
also said to be seeking legal opinions on the NJC’s decisions.

The NJC absolved Justice Muhammad of any blame in deferring to the President to be sworn in as the Acting CJN.

He accepted the appointment, having been presented with an ex parte
order of the CCT, which led to Justice Onnoghen’s suspension.

The Nation learnt that after receiving the NJC’s recommendations, the President elected to seek legal advice on them.

A top government official, who pleaded not to be named because he was
not permitted to talk on the matter, said the President was considering:

Buhari is also believed to be thinking of asking NJC to recommend
deterrence for Onnoghen or seeking further consultations with the
council.

The President is also said to be planning to seek advice on whether the input of the Senate necessary in retiring Onnoghen?

The source said: “Since he received the NJC’s recommendations, the
President has been thinking of how to manage the situation without
rubbishing the anti-corruption agenda of his administration. He has the
right to accept or reject the council’s recommendations on Onnoghen.

“The President is already seeking legal opinion on legal issues
surrounding the NJC’s decisions. He does not want to set a bad precedent
in tackling this Onnoghengate”.

The source confirmed that the President met with Vice President Yemi
Osinbajo. He believed Onnoghen’s case and other matters were discussed.

Responding to a question, the source said: “What NJC decided was a kind
of soft-landing for Onnoghen with moral and legal implications.

“Apart from stepping down, there are concerns about what Onnoghen is
really offering as deterrent. Some are saying why can’t the law run its
full course?

“Others are pressurising the government to take advantage of the window
created by the NJC to rebuild the ties between the Executive and the
Judiciary as a result of Onnoghen’s travails.”

It was unclear whether or not the President would need the consent of the Senate to retire Onnoghen.

“This is part of the legal opinion being sought by the President,” a presidency source said, pleading not to be named.

Section 231 of the 1999 Constitution says: “(1)The appointment of a
person to the office of Chef Justice of Nigeria shall be made by the
President on the recommendation of the National Judicial Council subject
to confirmation of such appointment by the Senate.

“(2) The appointment of a person to the office of a Justice of the
Supreme Court shall be made by the President on the recommendation of
the National Judicial Council subject to confirmation of such
appointment by the Senate.

“(3) A person shall not be qualified to hold the office of Chief Justice
of Nigeria or of a Justice of the Supreme Court, unless he is qualified
to practise as a legal practitioner in Nigeria and has been so
qualified for a period of not less than fifteen years.

“(5) Except on the recommendation of the National Judicial Council,
appointment, pursuant to the provisions of subsection (4) of section
shall cease to have effect after the expiration of three months from the
date of such appointment, and the President shall not reappoint a
person whose appointment has lapsed.”

Part 1 of the Third Schedule to 1999 Constitution says: “The National Judicial Council shall have power to:

Meanwhile, the NJC has recommended the confirmation of Justice Ibrahim
Tanko Muhammad as the substantive Chief Justice of Nigeria.

Another source said: “The council actually did not find him culpable of
infractions. He actually did not even want to be inaugurated as the
Acting CJN until there was evidence of an ex-parte order from the CCT on
Justice Onnoghen’s suspension.

“As the next in-command, the NJC said he should take over from the CJN.” 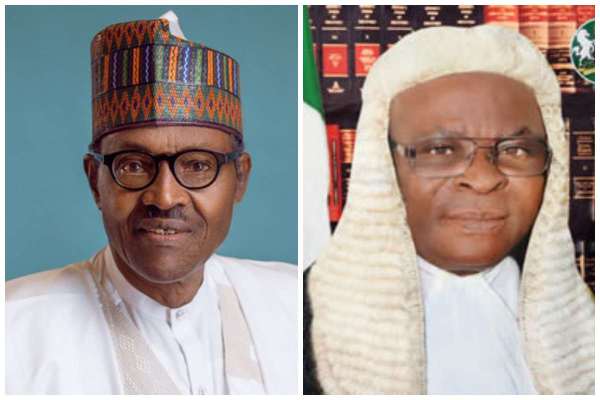 When contacted, a source in NJC said: “In line with Section 26 of the
Judicial Discipline Regulations of 2017, the council has reached out to
all those affected by its decisions.

Section 26 says: “The decision taken in regulation 25 of these
Regulations shall be notified to the following persons: (a)The subject
of the decision; (b)The Complainant and (c) The relevant Head of Court

“Upon a request made to the Council, the decision may be notified to any
other person. The grant or refusal of such request is in the absolute
discretion of the Council.”