by Tony Orji
in News
Reading Time: 2 mins read
A A
1
Share on FacebookShare on TwitterShare on Whatsapp 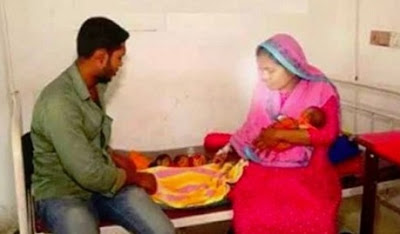 A young mother has delivered healthy twins nearly a month after giving
birth to a baby boy, leaving family and friends in bewilderment. Arifa
Sultana, 20, and husband Sumon Biswas welcomed a premature little tot
into the world at Khulna Medical College Hospital, in Bangladesh, on
February 25.

Arifa then returned home to look after her child and began settling into
life as a new mum. But her world changed when she was rushed to
hospital on March 26 again, after her water broke.

She underwent an emergency C-section and delivered twins a short time
later. The little boy and girl are said to be perfectly healthy. She has
returned home again with her new arrivals.

Sumon, a labourer, earns around £53 a month. Arifa is worried they won’t
be able to support the children and doesn’t know how the family “will
manage such a huge responsibility with this little amount”.

Doctors believe she had two wombs and managed to carry children to full term in both of them.

Medical expert Dilip Roy said such cases are incredibly rare. She told
The Tribune: “She didn’t realise she was still pregnant with the
twins. Her waters broke again 26 days after the first baby was born and
she rushed to us.

“The first baby was born from one womb. The two babies born here are
from the other womb. It’s a rare incident. I have seen such a case for
the first time. I had not even heard about such incident before.”

Dad Sumon has vowed to provide a good life for the three new babies. He
told AFP: “It was a miracle from Allah that all of my children are
healthy. I will try my best to keep them happy.”

LOL! Shehu Sani to Fashola: Those enjoying 24hrs power supply are in Jupiter