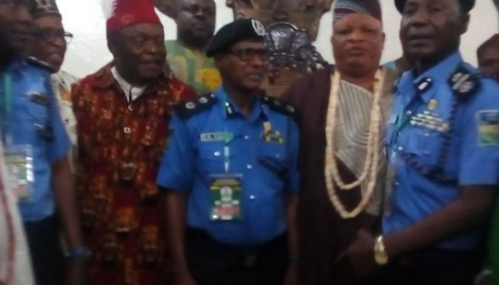 In an effort to quell the election crisis in Okota area of Lagos, the
Assistant Inspector General of Police in charge of Zone 2, Lagos and
Ogun, AIG David Folawiyo and the new Lagos State Commissioner of Police,
CP Mu’azu Zubairu, have engaged community leaders, the Osolo of Isolo,
Oba Kabiru Adelaja Agbabiaka and Eze Ndigbo and Chairman Council of
Ndieze Lagos State, Eze Christian, Uchechukwu Nwachukwu and other
community leaders in peace talk.

CP Zubairu while speaking at the palace of Osolo of Isolo on Monday
evening said, what happened on Saturday was a matter of concern for
everybody, including the security agencies, the Oba and the residents.

According to him, everybody was aware of the issues in the area but not
aware of the true facts. He said he was in the area on Saturday with the
AIG and without knowing that what happened in Okota, the election was
wonderful.

“They said three people were killed and nobody had seen one corpse
anywhere in this area. The gentleman who was attacked was immediately
rescued, rushed to the hospital and he is getting better in the
hospital. But you can see the negative news being sprayed about this
area which is not good for everybody.

“If there are issues of elections in Nigeria, it should not be in Lagos
and if there is any problem of elections in Lagos, why should it be in
Okota where you have peace-loving Nigerians living together?

“This is why the AIG and myself have come here to reemphasise the
peaceful co-existence which I believe has been happening in this kingdom
for so many years. This kingdom is not known for any violence or
crisis. It is known for living together in peace; why is this area
trying to get a new name now? A place of crisis and chaos?

The CP said he believed the meeting was going to cement the relationship between the communities in the area.

“It is going to tell our followers that we are all one, and that what we
need is peace. On our own side as a security agency, we are going to
tell the people that we are here for everybody. We assure them that we
are going to give the necessary safe and secure environment for the
remaining elections.”

He urged the leaders to allow people vote candidates of their choice.
“Party A or B doesn’t matter because that is what is bringing the
problem. That it must be a particular party must be erased from our
minds. Let us focus on good leadership. Nobody must be compelled to
choose a party or candidate of any party.”

Eze Nwachukwu said, the meeting with the Oba was very necessary and was about what happened during the last election.

According to Nwachukwu, there was a disagreement and the Igbo, Hausa and
Yoruba communities were ready to sort it out and agree among themselves
that if such should happen, they should report to the police or the
Oba.

“What happened was that some hoodlums high jacked some polling units and
suddenly somebody did not go to the police nor the oba and went ahead
and took the laws into his hand. And nearly take someone’s life. Nobody
died but there were some injuries.

“We have agreed that everyone should go home and talk to their people so
that peace can reign. We have talked about peace for the Igbo, Hausa
and Yoruba communities. We have agreed to be meeting from time to time
to discuss our common problem for the interest of everyone.”

Oba Agbabiaka urged the Igbo leaders to always report any issues or disagreements to the police if they cannot come to him.

“Anytime you have any problem or any grudge with any people, you should
please if you cannot come to me, call the police. You cannot take the
laws into your hand or give judgement by yourself.

“Ndigbo, you see sometimes, it is good to show signs of appreciation.
Majority of you know me, either you had your property through us or
through the government.

“All you should know is that you are within Isolo and there is nothing
that I do that I don’t carry you along. And that is what brought the
idea of handing about four or five of you chieftaincy tittles.

“Also, the government means well for you. Luckily, in the last election,
the House of Representatives winner in this area is your man, an Igbo,
and the House of Assembly representative is also your man, two
councillors are from you and also one supervising councillor.”

The Oba said there was nowhere in Lagos State the Igbo could see such
gesture, adding that the government of Lagos State was trying to look
after them and therefore them to be grateful.