Aisha Buhari Disagrees With Okorocha Over His Son-in-law 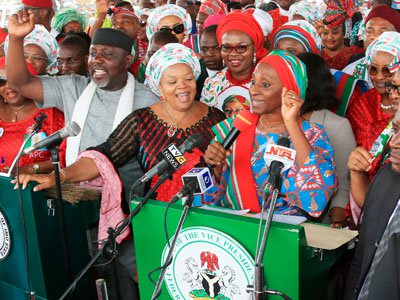 Represented by the wife of the vice president, Mrs. Dolapo Osinbajo, the
first lady was confident that the South East and Imo State in
particular would vote all APC candidates in the coming elections.

“A vote for Buhari is a vote for progress. APC has done well and we must
all support all APC candidates,” she said at a rally in Owerri
organized by APC women and youths in the South East.

She added: “I am happy with the crowd we saw today. It shows that Imo is
APC and I want to urge all our youths not to fight, avoid any form of
crisis because President Buhari is a peaceful man. From what we have
seen today President Buhari has won the South East the same way all our
APC candidates have won.”

At the rally was Uzodinma whose candidature is strongly opposed by Okorocha.

The governor is rooting for his son in law, Uche Nwosu, who is
contesting the March governorship election on the platform of the Action
Alliance (AA).

Nwosu was originally in the APC until the party gave its guber ticket to Uzodinma.

An angry Okorocha said at yesterday’s rally that nothing would stop Nwosu from succeeding him as governor.

He said: “Let me say this madam First Lady, this time around we are
not here to ask you to campaign for Buhari. What my wife has done is to
tell you that Buhari is on ground.

“Imo victory for Buhari is
designed, sealed. In Imo state, we have 47 political parties and one of
the perfect alliances is Action Alliance led by Uche Nwosu.

“Nwosu
is APC in spirit. APC, owes Imo people an apology because of the
injustice meted to Imo people. In Imo state, Nwosu will win Imo state.
It is not anti-party. We refused imposition in Imo state.”

At some point during the rally supporters of Uzodinma and those of
Okorocha/Nwosu began to tear each other’s  campaign posters, and
eventually clashed. 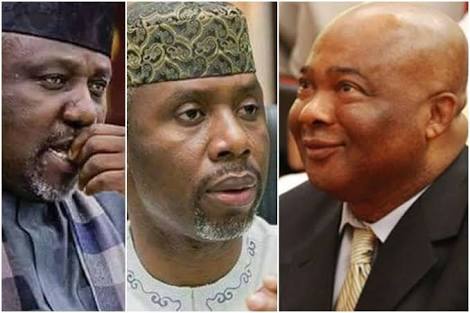 Security personnel had a tough time bringing the situation under
control. No fewer than 15 persons sustained injuries and were rushed to
hospital for treatment.

Speaking to reporters on the situation, Uzodinma asked the APC
leadership to “look into the matter and take appropriate action.”