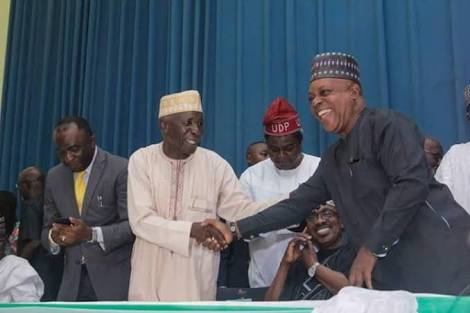 Leaders of the 42 political parties involved in presenting a coalition
presidential candidate for the 2019 presidential election met in Abuja
on Tuesday.

The leaders, who met under the auspices of Coalition
of United Political Parties (CUPP), were said to have agreed that Atiku
Abubakar of the PDP and the presidential candidates of other parties
that emerged at individual primaries would undergo screening.

The leaders, at their meeting, which was held
behind closed doors at the Musa Yar’Adua Conference Centre, were also
said to have agreed that all the parties would support any candidate
picked for the election.

Sources at the meeting said that the
leaders of the CUPP were said to have pledged their readiness and
commitment to forge a common front to chase out the APC-led
administration.

The meeting, which was chaired by the Chairman of
the CUPP steering committee, Prince Olagunsoye Oyinlola, also had in
attendance the National Chairman of the SDP, Chief Olu Falae; National
Chairman of the PDP, Prince Uche Secondus; R-APC Chairman, Mr Buba
Galadima, and the Leader of the National Intervention Movement, Alhaji
Tafawa Belewa.

Also in attendance was a former Governor of Cross
River State, Liyel Imoke, and all the chairmen of the over 40 political
parties involved in the coalition.

Spokesman for the CUPP, Ikenga
Ugochinyere, confirmed the meeting, adding that “the meeting agreed to
rescue the country from the gradual drift to a state of economic
hopelessness and reign of impunity from the APC.”

He added, “At
the meeting, a decision was taken to start the process that will lead to
the eventual selection of the consensus candidate for the major
opposition parties in Nigeria.

“The CUPP chieftains pledged their
readiness and commitment to forge a common front to chase out the
incompetent APC administration.”