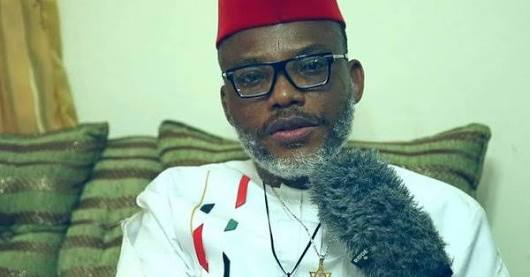 Nnamdi Kanu, leader of the Indigenous People of Biafra (IPOB), has
revealed how he escaped from his home and smuggled out of Nigeria,
during the military clamp down on the secessionist group.

In an interview with Israeli TV Channel 1, Kanu said he was “smuggled out” of the country with the help of relatives.

IPOB was the target of a Nigerian army operation code-named Operation Python Dance, launched in the south-east.

While the group was banned, Kanu went out of public glare until two
weeks ago when video of him in Israel resurfaced on social media.

In the interview, Kanu alleged that 28 persons were killed during
the army operation, which was largely felt around his father’s residence
in Umahia, Abia state.

“And one day, the Nigerian army came to my house to kill me. They killed 28 people in their attempt to kill me.

“My people evacuated me before they came to my bedroom. They took
me away and smuggled me out of Nigeria. I needed some time to recover
which I did and then, had to make my way to Israel.”

The IPOB leader added that he feels “relieved” that he “managed to
make it” to Israel, “the only place I feel safe in the world.”

He said he could have gone back to England (where he had been for
years) “but I still don’t feel safe in England. That is why I stayed
back in Israel.”