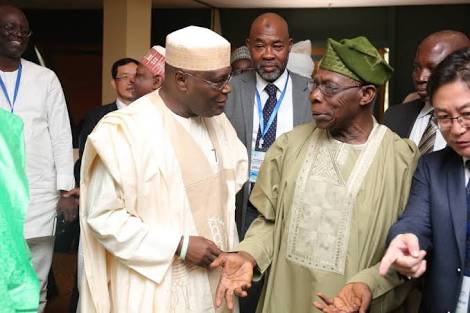 While delivering his acceptance speech after he was officially declared
winner of the PDP primary on Sunday, Atiku Abubakar thanked former
President Olusegun Obasanjo for picking him as his Vice President in
1999, saying without this, he could never have become the PDP
presidential candidate.

His words, “Finally, on a personal note,
I wouldn’t have been standing where I am today if my former boss,
President Olusegun Obasanjo, had not made me his Vice President.

“Under
his tutelage, I learnt quite a lot, and I believe the experience I have
got is going to impact on how I eventually govern this country. I wish
to pay my personal tribute to him.”

It remains to be seen if
Atiku’s latest charm would convince Obasanjo to pipe down on his
aversion to the presidential ambition of his one-time deputy.

Man Who Lived In US For 34 Years Completes His NYSC At 54; went to school with Osinbajo