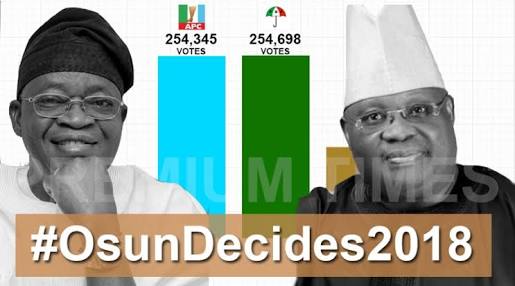 *Says APC fielding weak candidates loyal to somebody
A former governorship aspirant in Abia State and a chieftain of the APC,
Ambassador Chidike Ukauwa, has reveled why Ademola Adeleke of the PDP
was leading Gboyega Oyetola of the APC in the governorship poll in Osun
State before the election was declared inconclusive.

He said the APC’s failure to field a strong and popular candidate was the reason Adeleke of the PDP took the lead.

He, therefore, warned the state leadership of the
APC and delegates against choosing unpopular candidates that may rob of
the party of victory in 2019 elections.

Ukauwa, who spoke with
reporters on Tuesday evening in Umuahia, the Abia State capital against
the backdrop of the outcome of the Osun election, said the election
should be a big lesson to the APC.

He opined that only credible
and competent candidates can ensure the success of the party in the
upcoming 2019 general elections.

Ukauwa pointed out that the
results so far displayed by INEC in the last Saturday’s election showed
that the people have rejected APC.

He stressed that the masses
were revolting against APC in Osun State over alleged failure of
Governor Rauf Aregbesola to live up to the expectations of the people.

He
said, “Again, as we approach our primaries, the party should eschew
from imposition of unpopular candidates. Because why the PDP is leading
in Osun election is because our candidate there is not popular.”

“They should allow competent people to emerge in the primaries…”

Warning From CBN: Our Economy May Fall Into Recession