“My Wife Torments Me, I’m Scared Of My Life” – Vice President 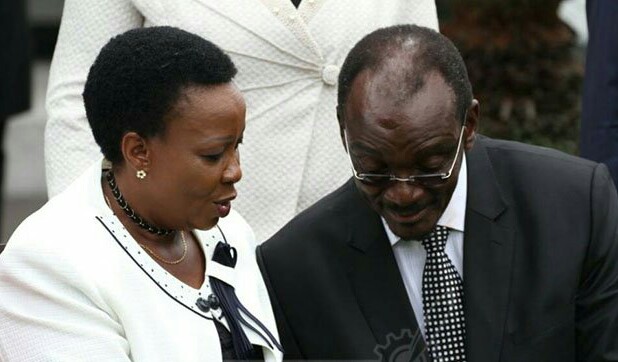 Zimbabwean VP, Kembo Campbell Mohadi, has cried out for help over the torture he receives from his wife, Tambudzani Bhugadi.

The Vice President accused his estranged wife of sending threatening messages to him after he filed for divorce.

Mohadi approached a civil court in Harare seeking a protection order against her. He told the court, “I
am a law-abiding citizen and given the increasing incidences of people
who are killing their spouses for passion, I pray that this honourable
court protects me against the threatened violence.

“I have
approached this honourable court seeking a protection order against the
respondent in terms of the Domestic Violence Act, in that the respondent
is a very abusive person and/or a person of a violent disposition such
that I am now living in fear of my life.

The VP claims that his estranged wife started behaving violently towards him after she was served a copy of the divorce summons.

“The
respondent has escalated her violent tendencies against my person
[Mohadi] and even calling me on my mobile phone while insulting me and
threatening to tarnish my image, which has the potential to damage my
political endeavours in view of my political office and as a member of
the government,” Mohadi said in a matter set to be heard on Friday.

His
estranged wife is said to have started selling off their matrimonial
property before the finalisation of the divorce matter in order to
tamper the ends of justice.

Mohadi also claimed that his wife has gone to the extent of turning their four children against him.