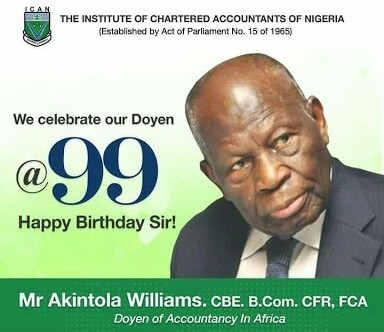 Mr Akintola Williams was born on August 9, 1919 in Lagos State Nigeria.
He was born in a wealthy family with generations working with white
settlers in Nigeria and the government. His grandfather was a successful
merchant while his father, Mr Thomas Ekundayo Williams was a clerk who
worked for the colonial office before starting his legal firm in Lagos.

Akintola began his education at

During
his elementary education, Akintola enjoyed academic success, winning a
scholarship to obtain a Diploma in Commerce from Yaba Higher College.
Because of the absence of higher education institutions offering
Commerce in Nigeria, Akintola Williams travelled to the UK to further
his studies in 1944. In 1949, he successfully qualified as a Chartered
Accountant in London, UK 3 years after obtaining a Bachelor of Commerce
from the University of London.

With an undying interest in the
Nigerian economy and business sector, he returned to Nigeria in the year
1950 and immediately got a job with the Inland Revenue as an assessment
officer. In 1952, Mr Williams resigned from the Inland Revenue to set
up Akintola & Co to compete against already established business
firms in the capital many of which were not locally owned.

Between
1964 and 1995, his firm Akintola & Co grew so big that he had over
500 staff, branches all over West Africa and partners worldwide.
Akintola Williams retired actively at the age of 64 in 1983 but
continued to serve his firm and Nigeria. He was part of the team that
established the Nigerian Stock Exchange. He was actively involved in the
running of these organisations into his old age. In one of the stock
exchange ceremony in May 2011, he called on operators to protect the
market and ensure there it is scandal free.

Some public sector
positions held by Mr Akintola include Chairman of the Federal Income Tax
Appeal Commissioners (1958–68), He was also an important member of the
Coker Commission of Inquiry into the Statutory Corporations of the old
Western Region of Nigeria in (1962), member of the board of Trustees of
the Commonwealth Foundation (1966–1975), Chairman of the Lagos State
Government Revenue Collection Panel (1973) and Chairman of the Public
Service Review Panel to right the wrongs in the Udoji Salary Review
Commission (1975).

After retiring, Akintola dedicated his time and effort in
various projects in the Arts. He built and establish the centre and
concert hall for the Music Society of Nigeria. In 1982, the Federal
government of Nigeria honoured him with the Order of the Federal
Republic award. He was appointed as Commander of the Most Excellent
Order of the British Empire in 1997 and the Nigeria-British Association
presented him a legacy award in 2011.

With much inspiration from
his successful merchant grandfather, Akintola Williams saw a gap in the
formal business sector in Nigeria and filled it totally. He was Awarded
the Commander of the Most Excellent Order of the British Empire (CBE),
Sir Akinola Williams will turn 100 in 2019. He was married to his
sweetheart, Mrs Efuntiloye Mabel Williams, who later died on Wednesday,
July 8, 2009.