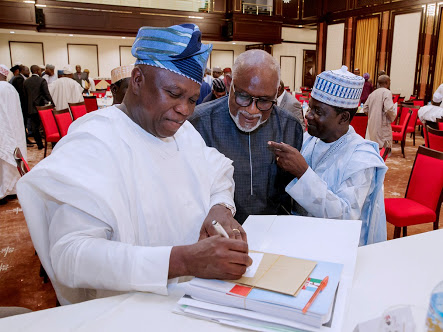 Governors on the platform of the All Progressives Congress (APC) are
said to be locked in a crucial meeting behind closed doors with the
party’s leadership.

He arrived the Imo State Governors’ Lodge, the venue of the APC governors meeting, at exactly 9:00 pm in a blue agbada.

It was learnt that the APC National Chairman, Adams Oshiomhole, was also at the meeting which started about 7:45 last night.

Although
details of the meeting were sketchy as of the time of filing this
report, it was gathered that the governors were meeting to deliberate on
the issue of the mode of primaries and the composition of the screening
committees.

The National Executive Committee of the party had,
at its last meeting, settled for the direct mode of primaries while
asking the states interested in holding indirect primaries to select
their candidates to write to the party leadership.

A decision by
some governors and their supporters to select candidates by consensus
and indirect primaries had led to protests from some stakeholders, who
insisted on the direct primary.

The governors are expected to ask for Oshiomhole’s support for Ambode.