Tinubu Not Happy with Buhari Govt., Supporting Him for His 2023 Ambition – Saraki 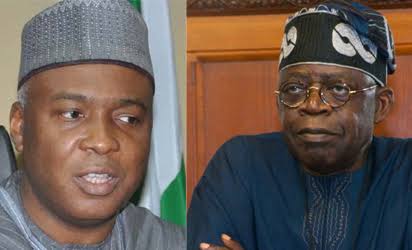 Senate President Bukola Saraki has alleged that the National Leader of
the All Progressives Congress, Asiwaju Bola Tinubu, is only supporting
President Muhammadu Buhari’s re-election with the hope of succeeding the
President in 2023.

Saraki made the allegation in a statement on Monday in response to an open letter written by Tinubu on Sunday.

Tinubu
in his letter, released late on Sunday, had said the Senate President
dumped the APC because of his presidential ambition and selfish quest
for power rather than good governance.

But in a statement titled,
‘The Tinubu Rhetoric- My Response’, the Senate President said when
Tinubu was appointed the head of the APC’s reconciliation committee, he
(Tinubu) reached out to him and admitted that he was also not satisfied
with Buhari’s performance but he would remain in the party so that he
(Tinubu) could emerge President in 2023.

Saraki said Tinubu told him that he would support Buhari even if the President was on a stretcher.

Saraki
added, “However, during those meetings, the point of disagreement
between me and him was that while I expressed my worry that there was
nothing on the ground to assure me that the administrative style and
attitude would change in the next four years in a manner that would
enable us to deliver the positive changes we promised to our people, he
(Tinubu) expressed a strong opinion that he would rather ‘support a
Buhari on the hospital stretcher’ to get a second term because in 2023,
power will shift to the South-West.

“This Tinubu viewpoint was not only expressed to me but to several of my colleagues; so much for acting in national interest.

“It
is clear that while my own decision is based on protecting collective,
national interest, Tinubu will rather live with the identified
inadequacies in the government for the sake of fulfilling and preserving
his presidential ambition in 2023. This new position of Tinubu has only
demonstrated inconsistency, particularly when one reviews his
antecedent over the years.”

Woman Gets Married For The First Time At 60 (Photo)