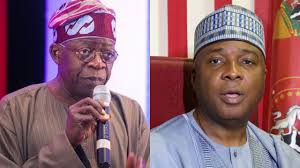 Senate president Bukola Saraki’s statement on the 2023 presidential
ambition of the National Leader of the All Progressives Congress,
Asiwaju Bola Tinunu attracted diverse reactions on Tuesday.

Saraki had on Monday said Tinubu was supporting President Muhammadu
Buhari’s re-election with the hope of succeeding the President in 2023.

He said Tinubu told him he would support Buhari even on a stretcher.

Saraki
spoke in reaction to a statement on Sunday by Tinubu, alleging that the
Senate president dumped the APC because of his presidential ambition
and selfish quest for power.

The National Publicity Secretary of
the All Progressives Congress, Mr Yekini Nabena, in an interview with
The Punch, indicated that it was premature to talk about 2023
presidency, adding that Tinubu’s presidential ambition had not been
communicated to the party.

When asked to comment on Saraki’s
statement, Nabena said, “This (Tinubu’s ambition) has not been
communicated to the party, so I cannot comment on it. Besides, why
should anybody be talking about 2023 when we are in 2018? Is anybody
God?”

Tinubu, Saraki’s conflict about personal interests – Afenifere
Commenting
on the exchange of words between Saraki and Tinubu, the Yoruba
socio-cultural association, Afenifere, expressed dismay over what it
identified as the elevation of personal interests and ambitions over
national good and development by politicians in the country.

It
noted that the verbal exchanges between the APC leader, Bola Tinubu, and
Senate President Bukola Saraki were all about their personal interests.

Afenifere
spokesman, Yinka Odumakin, expressed disappointment that the two men
were more interested in personal ambitions than in national good and
progress.

“You cannot see anything in these exchanges that talk
about national good or higher values. The only thing that was
substantial was when Saraki said he was against Muslim-Muslim ticket in
2014. If that was true, it would have been unthinkable in a Nigeria so
badly divided as it is today. Clearly, the arguments were about personal
interests and ambitions,” Afenifere noted.

It’s not a crime to be ambitious – Junaid Mohammed
But
a Kano State delegate to the 2014 National Conference, Dr Junaid
Mohammed, said there was nothing wrong with Tinubu or anybody for that
matter being ambitious.

He stated he would not quarrel with
politically-ambitious people so long as the process of actualising their
ambition would not lead to collateral damage that could ruin the
country.

Mohammed made his view known in a telephone interview with The Punch in Abuja on Tuesday.

The
medical doctor-turned politician said, “Unlike Bukola Saraki, I do not
blame anybody for being ambitious as long as the process of achieving
the ambition doesn’t create so must collateral damage that will be
harmful to the country. I don’t have any problem with it.

Speaking
about Tinubu’s statement which led to Saraki’s response, Mohammed said,
“I don’t know if the information he has as regards either Buhari
himself, Tambuwal or Bukola Saraki for that matter is necessarily 100
percent reliable.

“Let me state for the records, Tinubu is my friend and I would not take issue with people I consider my friends publicly.

“Having
said so, I must admit that some of his criticisms in defence of Buhari,
the APC and even Adams Oshiomhole, who was until recently a persona non
grata to him, is something I find rather amusing and somewhat a little
surprising.

“And I don’t know whatever calculations he might have
had in his defence right or wrong of Buhari contrary to what he tells
people in private; no matter how he goes about his defence of Buhari and
people like Oshiomhole and others, I don’t think that will pay him off
eventually in his own political ambition.”

Tinubu shouldn’t think North will support him in 2023 – Adebanjo
But
a chieftain of Afenifere, Chief Ayo Adebanjo, says the APC leader must
be naive to think that the North will allow him to succeed Buhari in
2023.

The 90-year-old statesman also urged the people of the South-West not to allow themselves to be fooled by Tinubu a second time.

Speaking
with The Punch on phone on Tuesday, Adebanjo said, “Tinubu is
daydreaming if he thinks the North will ever support his presidential
ambition. We have our principles.

“We are not supporting Buhari
under any circumstance and Tinubu cannot lead Yoruba land because all he
has done is to lead us astray. All he has done for us is to give some
of our people who are close to him appointments.

“Nothing
tangible has been done for Yoruba land. He gave his stooges
appointments, nothing more, nothing less. If he has done more than that,
let him say it.”

Adebanjo said the only demand the Yoruba had made was restructuring which the APC had been dishonest about.

The
Afenifere chieftain said one of the reasons Afenifere supported Buhari
in 2007 was because of his promise to restructure the country to allow
for true federalism.

He said instead of keeping its promise, the
APC resorted to setting up a committee on restructuring to deceive
gullible Nigerians and the likes of Tinubu participated in the grand
scheme of deception.

Adebanjo added, “How can they be telling us
about restructuring committee, when from the outset, they were supposed
to have started restructuring. Who do they think they are fooling? If
Tinubu is daydreaming, he shouldn’t think others are daydreaming like
him.”

“Buhari is a stranger to us in Yoruba land. The only Yoruba supporting him are those benefitting from this corrupt regime.”

Attempts
to get a reaction from Tinubu’s Media Adviser, Mr Tunde Rahman, to
Saraki and Adebanjo’s statements were unsuccessful. Calls to his mobile
telephone number were neither picked nor returned.

How To Move Home Appliances Without Damaging Them

When Life Is Uncertain