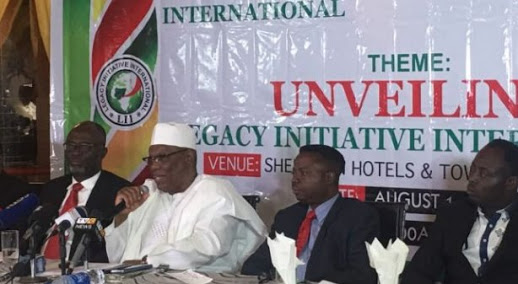 Legacy Initiative International, a civil society organisation, says
Nigeria must return to God to end corruption and other ills in the
country.

Speaking at a conference in Lagos on Wednesday, Kenny
Martins, grand patron of the organisation, said members of the group
have spent sleepless nights, travelled long distances consulting with
religious leaders on a cause which is for the common good of the
Nigerian people.

Martins said the country has tried everything possible to make Nigeria work but it is time to bring in God.

“We
are not saying we should run a country of Imams and Bishops, but we are
saying run a country where stakeholders and political actors can say
and stand true to their conscience and look their heart and God in His
face and say, for this nation I have done my best as endowed and
destined by God,” he said.

“We’ve tried everything possible as a
people; we’ve got independence, we’ve tried regional governments, we’ve
tried military governments and over the years these have failed us. So,
we finally came up with what everybody else does, and that is democracy.
Two decades on of democratic dispensation, we throw the question to
everybody, how far has Nigeria faired?

“It is not difficult
to imagine what will be the outcome if the top hierarchy of our
Christian and Muslim leaders, with all their wisdom and spiritual
disposal will narrow their choice to a single candidate in a
Presidential or gubernatorial election.

“Such candidate will win
easily without having to break any bank, and when he or she is in office
there will be no doubt that the person will be constantly conscious of
the divine route through which he or she got into office and the
consequences of not governing in the best way possible. With time such a
practice can become the norm and apply to both the local Government and
other elections. We have the audacity to hope that this will come to
pass.”

He added that it should be a thing of worry if President Muhammadu Buhari is continually hailed as an anti-corruption champion.

“At
ECOWAS level, at AU level, then there is something wrong if our
president becomes anti-corruption champion continentally and globally.
We believe that if we adopt what legacy is selling, corruption will
become a thing of the past. From the president to the councilor would
have themselves, God and conscience to contend with.”