After Begging For Obasanjo’s Support In 2015, Tinubu Says “OBJ Can’t Tell Us Who To Vote” 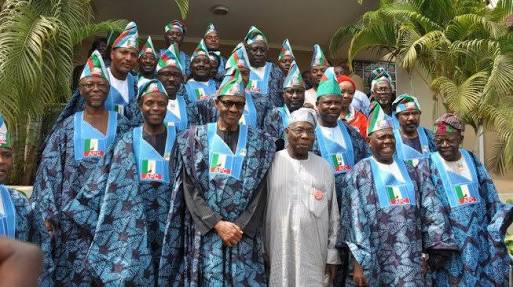 Nigerian politicians only respect you and show loyalty when they
desperately need you and your connections to defeat their strong
opponent. Once you help them get to power, they disregard you.

The
national leader of the APC, Bola Tinubu, on Tuesday slammed President
Olusegun Obasanjo, PhD, over the letter of criticism he wrote to
President Muhammadu Buhari months back, saying the ex-President had no
right to dictate who the people should vote for in the 2019 presidential
election.

The former Lagos State governor,
who said Obasanjo did his terms in office without being disturbed, urged
him to face his business in his Ota farm.

Tinubu said if
Obasanjo had laid a good foundation for the country when he was
President, like he (Tinubu) did in Lagos State, Nigeria would not be in
the mess that it was in.

Tinubu spoke at the Lagos APC secretariat in Ogba on Tuesday during the party’s stakeholders’ meeting.

Tinubu,
who switched between Yoruba and English languages, said having brought
Buhari in, the party would also ensure his re-election next year,
notwithstanding Obasanjo’s opposition.

“Look at us in Lagos, we
can get angry with one another, it is only God that has perfection. When
you elected me as governor, I laid the foundation. If we didn’t lay the
foundation for Lagos, there’s no amount of wisdom that Fashola may have
that will make the state as progressive as it has been.

“If we
didn’t lay the foundation, there’s no amount of wisdom that Ambode may
possess that will make things as smooth as they are…so, Obasanjo that is
talking, if he had laid a strong foundation in Abuja, the country would
not have scattered; things would not have been going the way they are
going. And you (Obasanjo) want to sit in Ota; face your chicken and egg
business.

“You cannot govern from Ota; you cannot tell us who to
vote for; you have used up your time. Let us tell Obasanjo so. Our
Buhari is our own; we were the ones who brought him and we will secure
the second term for him,” Tinubu said in Yoruba language.

In 2014, Obasanjo said he won’t support Goodluck Jonathan in 2015, the
APC turned him to their godfather, always visiting him and describing
him as a respected leader, both in Nigeria and abroad