2019 Presidency: The Man Who Will Emerge PDP Candidate 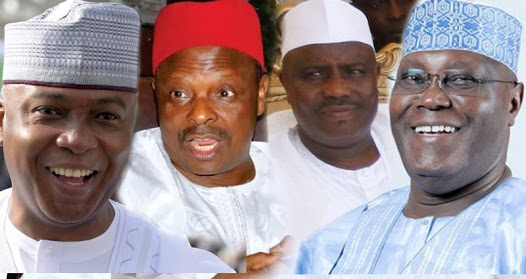 Ahead of the primaries for the 2019 general election, the parties are
neck deep in permutations on who to elect as their presidential
candidates. While it is taken for granted that President Muhammadu
Buhari might enjoy the Right of First Refusal in the ruling All
Progressives Congress (APC), the hot enclave is the main opposition
group, the Peoples Democratic Party (PDP) where 12 aspirants are
jostling for a presidential ticket.

Who among the top men will stand for PDP?
The Nation assess the chances of the PDP aspirants.

After the
hullabaloo over defections, the die is cast in the opposition Peoples
Democratic Party (PDP) which has to pick its presidential candidate in a
matter of weeks. By the timetable of the Independent National Electoral
Commission (INEC) for the 2019 poll, all parties have to elect their
presidential, governorship, National Assembly and State Assembly
candidates between August 18 and October 7, 2018. The primaries for
the FCT Area Council Elections will commence on September 4 and end on
October 27, 2018.

The presidential primary election of the PDP will be highly instructive for the following reasons:

It
will indicate if PDP really has learnt its lesson or could walk the
talk after 16 years of abysmal failure in power; it will produce a main
challenger to President Buhari. It is likely to determine whether or
not the party can make any impact in 2019 poll.

With its persistent vicious attacks on the administration of Buhari
and recourse to merger or alliance talks with about 45 mushroom parties,
the pressure is more on PDP than its arch-rival, the APC. For a party
noted for money-politics than issues, the conduct of the primaries will
make or mar its electoral fortunes.

So far, about 12 aspirants
have emerged in the party for the presidential primaries. It is a motley
crowd. The aspirants are ex-Vice President Atiku Abubakar; Sen. Rabiu
Kwankwaso; ex-Minister of Special Duties, Tanimu Kabiru Turaki;
Governor Aminu Waziri Tambuwal; Governor Ibrahim Dankwambo; ex-Governor
Ibrahim Shekarau; ex-Governor Sule Lamido; a former Interim National
Chairman of PDP, Sen. Ahmed Makarfi; Governor Ayodele Fayose;
ex-Governor Attahiru Bafarawa; Datti Baba Ahmed; and the President of
the Senate, Dr. Bukola Saraki whose body language has shown a serious
desire for the office . Analysts believe that Saraki is pretentiously
busy testing the waters. The visit of 45 political parties to him on
Thursday in Abuja was much more than the solidarity visit.

THE TENDENCIES IN PDP WHICH WILL SHAPE THE PARTY’S PRIMARIES
About
seven tendencies have been in the PDP in the last 20 years of its
existence. There is the military cabal which formed/ joined the party.
This cabal is represented by former President Olusegun Obasanjo,
ex-Military President Ibrahim Babangida, ex-Chief of Army Staff, Lt.
Gen. Theophillus Danjuma and ex-NSA Gen. Aliyu Gusau. There are also
the surviving elements of G-34 used as a springboard to form the party
but shoved aside later; the new generation of power brokers in the
party revolving around the shadows of Governor Nyesom Wike who is now in
control of the party’s structure; the present crop of PDP governors
who control delegates to the primaries; the old brigade of governors
under the leadership of Makarfi and ably supported by Lamido,
ex-Governor Liyel Imoke and ex-Governor Gabriel Suswam among others;
the anonymous captains of industry, bank executives, oil sector cabal
who share the ideals of the PDP secretly and benefited tremendously
through humongous patronage during its 16 years inglorious rule; and
now the defectors under the leadership of Saraki who has been branded as
the national leader of PDP at a recent emergency National Executive
Committee (NEC) meeting of the party to the consternation of many dyed-
in – the – wool faithful.

The incessant shuttles to ex-President
Obasanjo in Abeokuta (whose ghost is still haunting PDP), the Hill Top
mansion of Babangida in Minna, the T.Y. Danjuma haven in Lagos and the
modest Asokoro residence of Gusau pointed to how much reverence the
party leaders and members still accord the military cabal which joined
the party and produced Obasanjo as the nation’s President in 1999.
Virtually all presidential aspirants have turned the homes of these
military heavyweights to consulting clinics. Also, barely a few hours
after addressing a world press conference on Wednesday on the siege to
the National Assembly, Saraki jetted out to Minna to meet with
Babangida, which was a confirmation of the influence still being wielded
by the ex-military leaders. These past leaders have been fingered in
the looming coalition of forces against APC.

With the way the PDP
governors installed the National Chairman of the party, Prince Uche
Secondus, it is glaring that they will play a major role in the choice
of the party’s presidential candidate. Apart from keeping faith with the
mutual power agreement which brought Secondus to power, the governors
control the party structure at state level and they also determine the
voting pattern of delegates from their states. A member of the National
Working Committee said: “The governors have been dictating the pace in
the PDP since 2003. They are natural kingmakers and I don’t think 2019
will be different because most of the statutory delegates are either
their appointees or loyalists.”

Notwithstanding these tendencies
in the PDP, all the 12 aspirants have been traversing every corner of
the country in order to seek the support of governors and delegates. But
the big question is how will these tendencies throw up in the choice of
the party’s flag bearer? The big men are strategizing for the battle
ahead.

Cool Tips For Setting Up The Perfect Buffet Table