2019: The Big Battle For PDP Presidential Ticket Hots Up

by Tony Orji
in News
Reading Time: 5min read
0
Share on FacebookShare on TwitterShare on Whatsapp 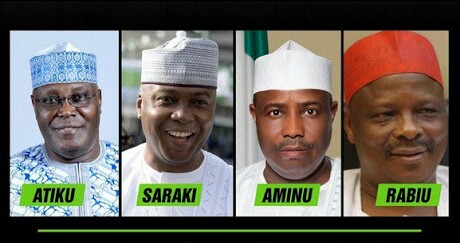 Now that it has become obvious that former President Olusegun Obasanjo,
who has always supported whoever emerged president is interested in a
change of leadership in Aso Rock, the battle now is who becomes the
candidate of the opposition to face President Muhammadu Buhari of the
APC.

Who among the top contenders will emerge?

The
Punch’s Olusola Fabiyi writes on the problem likely to be faced by the
main opposition party, the Peoples Democratic Party while picking its
presidential candidate for the 2019 elections

By this time four
years ago, the Peoples Democratic Party was battling to hold on to its
precious members. Despite being the ruling party at the centre at that
time, the party was not considered priceless to some of its die-hard
members, who were then considered as its first eleven.

In droves,
they trooped off from under its umbrella to pick the broom of the All
Progressives Congress. The mass exodus that hit the PDP then which was
arrogantly managed by the national leadership of the party, made it to
become the opposition party in 2015.

It was the first time the
party, which had proudly boasted that it would rule for 60 unbroken
years at the centre, tasted defeat at the federal level.

Almost
four years after, the party had yet to recover from the shock bestowed
on it by the disappointed electorate and its members.

Conversely,
things seem to be changing for the once rejected stone, as some of
those who had earlier pronounced it dead in 2014, have returned to give
life to it.

Their action was largely sequel to the treatment they
allegedly received from the APC, which they helped formed. The ruling
party came as a result of merger of three major political parties, which
were the defunct Action of Nigeria, All Nigeria Peoples Party and
Congress for Progressives Change.

The joining of the trio by a
faction of the PDP, then known as the New PDP, solidified the APC and
made it potent to deal a deadly blow on the then ruling party during the
2015 elections.

The celebrations in the new ruling party however
became sour when it was time to enjoy perks of office, after the APC
formed the government.

Majority of those who felt that their lots
would be better in their new abode allegedly experienced
disappointment. Hence, one after the other and like the Biblical
prodigal son, they have been returning to the party they once disparaged
and called awful names.

Eleven men in the race
Interestingly,
majority of those who led the exodus team then and have retraced their
steps, are also among the aspirants seeking the presidential ticket of
the party. Notably among them are a former Vice President, Atiku
Abubakar; a former Speaker of the House of Representatives and Governor
of Sokoto State, Aminu Tambuwal; a former governor of Kwara State and
President of the Senate, Dr. Bukola Saraki; and a former Governor of
Kano State, Senator Rabiu Kwankwaso.

Those who remained behind in
the party and refused to be debased by the mass departure then and are
now seeking the presidential ticket are a former Governor of Kaduna
State, Senator Ahmed Makarfi: Governor of Gombe State, Ibrahim
Dankwambo: a former Governor of Jigawa State, Sule Lamido and an
Entrepreneur, Datti Baba-Ahmed and a former Minister of Special Duties,
Tanimu Turaki (SAN).

Both of them are also seeking to fly the flag of the party during the February 14, 2019 presidential election.

The
Governor of Ekiti State, Mr. Ayo Fayose, who was the first to declare
his presidential ambition, is believed to have fallen by the way side
from the race. Besides being considered as not very optimistic about
realising his dreams, the PDP, of which he is the chairman of its
Governors’ Forum, has zoned the ticket to the northern part of the
country. Thus, some consider the declaration by Fayose as another
razzmatazz.

Dilemma of picking a suitable candidate
No
doubt, the calibre of political bigwigs who have returned to the PDP,
and the qualities of those considered as ‘landlords’ in the party, may
have compounded the problem its national leadership is probably facing
in choosing who will face the presidential candidate of the APC,
President Muhammadu Buhari, in 2019.

All the aspirants, who have
openly announced their ambition, have pronounced themselves the best
candidate for the race. Almost all of them also see President Buhari as a
candidate they can defeat, if fielded by the party.

“I can match
President Buhari’s integrity for integrity and I have what he does not
have: I have education, I have knowledge, I have the fear of God, which
he doesn’t have. Even if you have a good sales team, you need a good
product. And I am that product. I can assure you that I am not made in
‘Taiwan’.

“Since 2015 that we lost the election, many things have
changed. It is no longer about the platform alone but also about the
candidate. We must be able to come up with a candidate that has
strength of character to wrestle Buhari and pin him to the ground
(should he emerge the APC presidential candidate),” Turaki boasted.

Atiku, who has also been meeting delegates across the country, believes no one is better suitable for the ticket than himself.

Though
he says he is qualified, he is not desperate to be President. “I will
never leave the PDP and I will support any presidential candidate that
emerges so long the process is transparent,” Dankwambo told our
correspondent.

Makarfi, who was the acting national chairman of
the party when it ran into turbulence, and joined others in rescuing the
party from the hands of its erstwhile National Chairman, Senator Ali
Modu-Sheriff, is also anchoring his campaign on his stewardship at the
party and his state.

The expected joining of the race by Saraki,
Tambuwal and Kwankwaso, will definitely make the race interesting, but
tedious for the Prince Uche Secondus-led National Working Committee.

Both
Saraki and the governor of Sokoto State, who are considered as big
fishes, have tactically indicated their interest in running for the
position.

While Saraki said that “I’m consulting and actively
considering it (running for the Presidency)… I believe I can make the
difference,” Tambuwal said that he had been under pressure from
various quarters to contest the presidency. He promised to make his
decision known after a few days.

So, how would the party make a
probable choice from the arrays of these presidential aspirants? The
Chairman of the Board of Trustees of the party, Senator Walid Jibrin,
said that the board would meet with all the aspirants to discuss on
whether it would be feasible to have consensus candidate.

He
said, “We are seriously considering the possibility of bringing the
aspirants together, with a view to seeing if we could get a consensus
among them. But we are happy that we have a large number of them
aspiring. This is a proof that the PDP is a party to beat in 2019.”

Asked
what would happen if the aspirants failed to agree on a consensus,
Jibrin said that there would be no other option but for them to go into
election.

He, nonetheless, assured those that recently defected
into the party, that they would not be treated as outsiders. “But we
will also not forget the roles played by our hardworking old members,
especially when the PDP was almost dead,” he added.