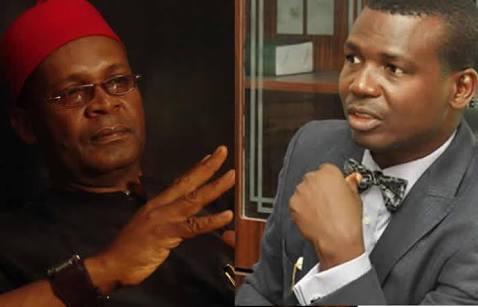 Lagos-based lawyer, Ebun-Olu Adegboruwa, has filed a suit before the
Federal High Court in Lagos seeking the prosecution of the Lagos
spokesman of the All Progressives Congress (APC), Joe Igbokwe, over an
allegedly offensive Facebook post recently made by the latter.

The post alleged bribery at the highest court in Nigeria.

He said that Igbokwe, on July 16, 2018, at about 3.20pm, posted on his
(Igbokwe’s) Facebook wall that “Wike will not have the audacity and
temerity to kill again in Rivers State and run to the Supreme Court to
buy justice. It will never happen again in Nigeria where Buhari is the
President.”

Adegboruwa, in his suit filed on Friday, claimed that
Igbokwe disparaged the judiciary, alleging that the Facebook post was
capable of eroding public confidence in the court.

He is seeking a
court order compelling the Attorney General of the Federation, Abubakar
Malami (SAN), who was joined as a co-defendant with Igbokwe in the
suit, to invite the APC spokesman to substantiate his claim that the
apex court sold justice to the Governor of Rivers State, Nyesom Wike,
failing which he (Igbokwe) should be prosecuted.

According to Adegboruwa, following the alleged post by Igbokwe, the
Chief Justice of Nigeria, Justice Walter Onnoghen, invited security
agencies to probe the alleged selling of justice to Wike.

The
CJN, according to him, asked the security agencies to identify the
culpable apex court Justices if the allegation is true or to take steps
to prosecute Igbokwe if it turns out that the allegation is false.

Adegboruwa
said Wike, on his part, through the Rivers State Government, had
demanded explanation from Igbokwe, with a threat of legal action.

Adegboruwa is contending that the
alleged Facebook post by Igbokwe would create a situation where “lawyers
would lose patronage and would no longer be able to handle cases in
court, given that it is now possible to buy justice with money.”

The Punch reports that he urged the court to compel the AGF to take steps to prosecute Igbokwe.

He
is also asking the court to sack Igbokwe as the General Manager of the
Lagos State Wharf Land Fee Collecting Authority and to declare him as a
person not fit and proper to be elected or appointed into any public
office in any part of Nigeria.

The suit has yet to be assigned to any judge.

“We Now Have Facts On How Ekiti Election Was Rigged” – PDP