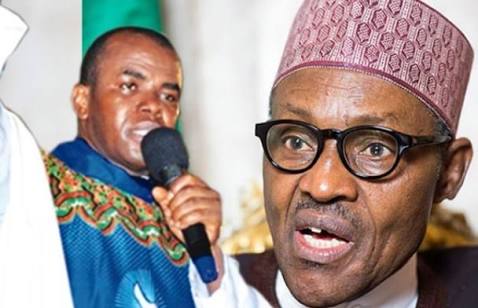 Rev. Fr. Ejike Mbaka has described the man he supported openly to become
president in 2015, Muhammadu Buhari, as one who is caged.

Mbaka, the spiritual director of Adoration Ministry, Enugu, said this
during an exclusive chat with the publisher of SaharaReporters and 2019
presidential aspirant, Omoyele Sowore.

“When I was telling Jonathan and Co, they can’t come back instead of
believing, they started attacking me and God says the chair is vacant
Buhari will take over, I never knew who Buhari was. They accused me of
being sponsored by Buhari and God knows until now Buhari has never given
me One Kobo.

“Am not against his leadership because he has not given me anything, am
only unhappy with him because he doesn’t want to make necessary changes.

“The much I know about Buhari is he meant well, but it’s too unfortunate
that he is caged by people who are not telling him the truth.”

Recall that on 2018 New Year day, Fr. Mbaka who had anointed Buhari as
President in 2015, asked him not to run for a second term in office. He
said:

“I’m asked to advise you, don’t come out for the second tenure; after
this, and retire peacefully. Come back to yourself or you will cry by
the time you will be sent out of office. Those who are encouraging you
to come out and run again want to disgrace you shamefully and publicly.

“The country needs change, as I said Buhari is a good man but because of
a lot of factors around him, those around him are not telling him the
truth, even when they tell him the truth and he gives orders they go and
mutilate it and tell him that everybody is happy and that everything is
moving well.

“We need God to give us someone after his own heart, who can emancipate
Nigeria, because Nigeria is the heart of Africa, is the hub of Africa
forget about South Africa or whatever she is doing. Nigeria is Africa
because when Nigeria is good, Africa is good.”

Shehu Sani Reacts To APC Break Up: “We Have Left Egypt”

New ATM Scam Fraudsters Use & Can Put You In Serious Trouble