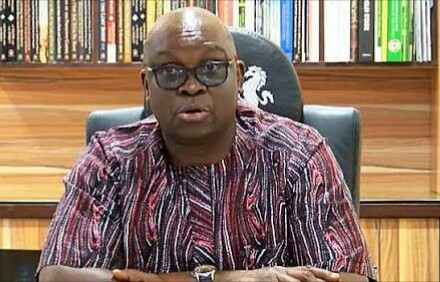 A statement from the party;
The Peoples Democratic Party
(PDP) rejects in its entirety whatever outcome is being concocted by the
All Progressives Congress (APC), the Independent National Electoral
Commission (INEC) and security agencies, in the governorship election in
Ekiti state.

The process, characterized by open alteration of
results, brutalization of innocent citizens, barefaced cruelty and
intimidation of our members by security agencies, is a brazen assault
against democracy and a direct subversion of the will of the people
which is completely unacceptable.

The PDP is
armed with the details of all manipulations by the APC, who is being
aided by security agencies and compromised INEC officials to rig the
election, particularly, the audacious alteration and substitution of
election results in favour of the APC at the collation centers amidst
the brutalization of our agents.

The PDP also has details of all
the polling units where we won, mostly with very wide margin ahead of
the APC, only for the security agencies to aid the swapping and
alteration of such results with those smuggled in by the APC at the
collation centers.

It is instructive to state that all the issues
we raised ahead of the election, including the conspiracy between the
APC, some compromised INEC officials and security agencies; the
importation of thugs from other states by the APC; the use of brutal
force against our members and the alteration of results in favour of the
APC, have all manifested.

The PDP holds strongly that there is
no way our democracy can survive with an electoral process such as this,
being witnessed today in Ekiti state under President Muhammadu Buhari
and the current INEC.

This bald-faced subversion of the will of
the people is a clear recipe for a serious crisis and we invite
Nigerians and the international community to hold President Buhari and
his APC as well as the INEC Chairman and heads of security agencies in
Nigeria responsible for any breakdown of law and order in Ekiti state as
a result of this election.

This on-going robbery of the
franchise of Ekiti people is a horrible rape of our democracy and most
uncharitable of President Muhammadu Buhari and the APC who hugely
benefitted from the credible election midwifed by the PDP in 2015.

5 Ways To Wear Heels Without Pain

Footballer Obafemi Martins Shows Off His New House in Lagos