I’m Not Afraid Of EFCC, I Won’t Run Away From Nigeria – Fayose 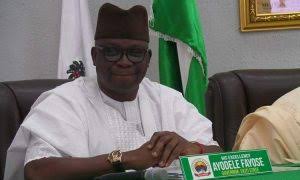 Ekiti State Governor, Ayodele Fayose says he is not afraid of the
Economic and Financial Crimes Commission, EFCC, and that he will not run
away from the country after the expiration of his tenure.

There has been insinuations online that Fayose plans to escape.

His
spokesperson, Lere Olayinka, said: “He is not afraid of anything. What
are they going to do to him. Is EFCC the court of law?”

The EFCC
had tweeted on Sunday that it would get at Fayose when he hands over
power in October to answer questions on the $1.3 billion fraud
allegations.

Fayose of PDP is slated to hand over power to
Kayode Fayemi, who won Saturday’s governorship poll in Ekiti after he
defeated Prof. Kolapo Olusola-Eleka of the PDP.

Recall
that Fayose won the June 2014 election in a landslide, defeating Mr
Fayemi in all the 16 local government areas of the state.

The Consular General will lead an international monitoring team for the Ekiti election. More photos…