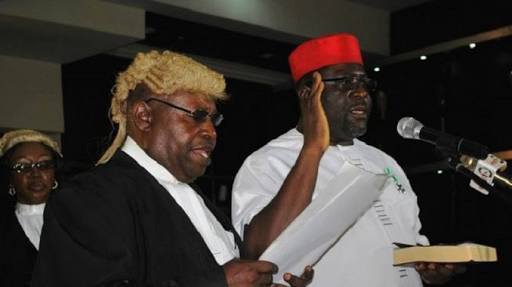 A High Court in Owerri, the Imo State Capital, has stopped the
swearing-in of Mr Calistus Ekenze as the new Deputy Governor of the
state.

The court issued an interim order stopping the swearing-in
ceremony after it was approached by Eze Madumere who is challenging his
impeachment as deputy governor of the state.

The ruling came just as Ekenze was about to be sworn in.

Top
government officials had started gathering at the Sam Mbakwe Exco
Chambers inside the Government House in Owerri where the swearing-in was
supposed to take place as early as 10 am.

But just after waiting
for over two hours for the commencement of the ceremony, the Imo State
Attorney-General and Commissioner for justice, Miletus Nlemadim,
announced that the state government had complied with a fresh order from
the court preventing the Chief Judge of the state, Pascal Nnadi, from
swearing-in Mr Ekenze.

According to the Attorney-General, the
state government is law-abiding and respects the rule of law and as such
obeyed the court order.

He, however, explained that the state
government is doing everything possible to vacate the order to enable it
to swear in the deputy governor designate on a future date.

Recalled
that Governor Okorcha had nominated Ekenze as deputy governor after the
impeachment of Eze Madumere yesterday, while the matter was still in
court.