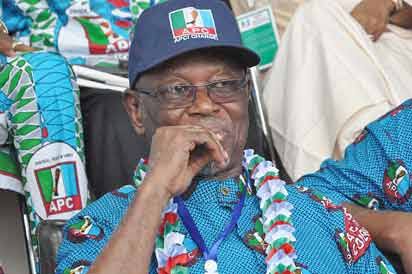 National Chairman of the All Progressives Congress (APC), John
Odigie-Oyegun, has said that he will not be re-contesting the national
chairmanship position in the forthcoming National Convention slated for
June 23.

He stated this on Friday night in Abuja while speaking
with newsmen, adding that his decision was taken after wide consultation
with close political associates and family members and not because of
intimidation.

However, he said that the tenure
extension that was hitherto agreed by the party’s National Executive
Committee (NEC) suffered a set-back following President Muhammadu
Buhari´s opposition.

According to him, the tenure extension would
have helped to stabilise the party in the face of some of its
challenges and may have prevented the crisis that followed its recent
congresses in some states of the federation.

He said that some of the party leaders ought to have considered the tenure extension to be in the best interest of the party.

This,
he said, would have ensured that the party go into the 2019 elections
as a united fighting force, rather than one that was potentially
weakened by internal conflicts arising from competitive congresses and
convention.

Odigie Oyegun urged party leaders to close ranks and
to make the party a strong fighting force ahead of the 2019 general
elections.

What To Do When You’re Waiting On God

Breaking!! Do you need the best hands to employ? Click here to get the best employees and paid Interns