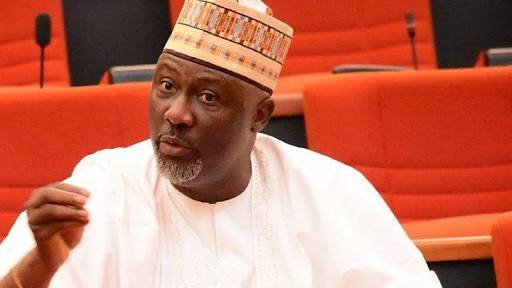 Senator Dino Melaye has updated his position concerning the Federal
Government’s decision to honour presumed winner of the 1993 presidential
election, Moshood Abiola, with Grand Commander of the Federal Republic
(GCFR).

The senator now fully supports the decision which has continued to generate debates.

Recall
that at the Senate plenary last Thursday, he argued that the National
Honours Act provides that such a honour be conferred on the recipient in
person; and since Mr Abiola is dead, he cannot receive the award.

He added that the act provides that the honour be bestowed on Nigerians and since Mr Abiola is dead, “he is no longer Nigerian”.

“Subsection
2 of the act says a person shall be eligible for appointment to any
rank or holder unless he is a citizen of Nigeria. A dead man is not a
citizen of the Federal Republic of Nigeria. We should not be emotional
about this. The law remains the law.

“Subject to the next notice,
a person shall be appointed to a particular rank of an order when the
president receives him in person,” he said.

Mr Melaye’s comment was widely criticised by many Nigerians.

However, in a statement on Sunday, Mr Melaye backtracked, saying his previous comments were “misrepresented.”

He said his support for the award is unshaken as he had been clamouring for such years before.

“Since
last two days, I have been inundated with calls and text messages from
well-meaning Nigerians especially my constituents, who want to inquire
my exact position on the declaration of June 12 as the new Democracy Day
and the conferment of the highest National Honours of GCFR on the late
Chief MKO Abiola, the presumed winner of June 12, 1993 presidential
election.

“For the avoidance of doubt, my views and belief on the
sanctity of June 12 and the place of the late Chief MKO Abiola in
Nigeria’s democratic history, have not changed and will not.

“Hence,
in my view, the decision by the Federal Government led by President
Muhammadu Buhari to honour the late business mogul was deserving and
long overdue save for the attendant legal issues raised.

“It is a
verifiable fact that I have canvassed for this recognition for Chief
Abiola over the years, and granted interview to Channels Television two
years ago, where I advocated for same.”

The lawmaker did not offer any clarification on his earlier statement on the “loss of citizenship of the deceased.”

He
instead urged the federal government to work on what he said were legal
encumbrances surrounding the decision and to alter the National Honours
Act “to accomodate the new development.”

“Let me make also it
abundantly clear that while both Chief Abiola and the late legal
luminary, Chief Gani Fawehinmi (SAN) deserved more than the GCFR and
GCON Honours respectively to be bestowed on them posthumously next
Tuesday, it is however important that the right thing be done in their
memory should not have any blemish in the guise of the current debate
for legality or otherwise of the historic Honours as we are witnessing
now.

“I urge the federal government to do the needful and display
sincerity of purpose by officially recognising Chief Abiola as
President-elect and cause the official results of the June 12, 1993
presidential election to be released by INEC since President Buhari
himself had admitted in the Presidential Order designating June 12 as
Democracy Day, the most freest and credible election, and then the GCFR
title will therefore have a meaning.

“If the right thing is done
now by the federal government by proposing amendment to the National
Honours Act 1964 to accommodate the current developments, no government
in future will reverse the decision. This is my stand as a lawmaker,”
Melaye added.

Nigerian Footballer Buys A Porsche Car For His Mother (Photos)