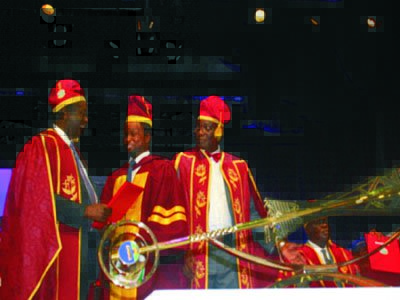 He also described the Nigerian Intelligentuals as “endangered species”.

The
lawyer-businessmam who spoke during the 49th Convocation Ceremony of
UNILAG, gave out N150,000 cash each to 11 best graduating students from
the Faculty of Law and two of their counterparts from the Distant
Learning Institute.

Defining the intelligentuals as “The People
in a society who are highly educated and often concern themselves with
ideas and new development”, Babalakin said: “The Nigerian intelligentsia
have largely lost out in the battle for Nigeria. Today I’m making a
clarion call to you all that it is not sufficient to earn a living. It
is not sufficient to be well paid. It is more important to participate
in the development of your country.

“For having the courage to pursue a subsequent degree, you have already
shown clearly that you intend to be part of the intelligentsia, but it
shouldn’t end there. We hope we’ll see UNILAG graduates actively
participating in all aspects of government and the civil society; and
generally found in places where we are seeking to enhance our nation.

“An
endangered species is the type of animal that will soon disappear from
the world. We have to stop this. Not by running away; not by saying that
governance is for those who cannot do better. Governance is for us all.
Let us participate. Let us contribute, so that at the end of the day,
we will create a great nation. I have no doubt in my mind that UNILAG is
at the fore front of making this happen.

“Be determined. Be ready to turn every stumbling block into a stepping
stone for the attainment of a greater height. It is important for you to
be change agents in the society. The society can only develop if we
have a united elite determined to protect the gains of the society. If
you look round at all the societies that have sustained their growth, it
has happened because of the selfless interest of the elite.
“The dictionary describes the elite as a body of people who are
interested in developing the society with the knowledge they have. That
is who I want you to be because fortune will fade away rapidly,
generations of good people have passed on anonymously, but those who
live for long are the ones who live in the minds of people and those who
commit their efforts to changing the society.

“To lawyers, you
have been endowed with a special training. A training that allows you,
if well-absorbed, to participate in every part of the society with
unusual distinction. Don’t allow anybody to categorise you. Don’t let
them tell you that because you are a lawyer, you can’t be an
administrator, an infrastructure developer or an outstanding engineer.
You have been trained to have an open mind to be able to absorb
information, distill it and use it properly.

“It is good to have
aptitude like you do but it is more important to have attitude, which
will help us all to achieve this objective. Attitude is your
determination to succeed. The preponderance of great people are those
who have attitude, not necessarily aptitude. It becomes a double whammy,
if you can combine both, but you should never feel handicapped because
you don’t have aptitude if you have attitude.

“When Margaret Thatcher was in secondary school, her school report said
she was ‘dull but determined’. When she went to the Bar, she was told to
work under Lord Lawson, then Sir Lawson, who told her he wasn’t sure
she was “coping”, and she said to him, “I will prove to you that I can
cope”. Years later, she was prime minister and among those considering
the elevation of Lord Lawson. She was so determined, resolute to make up
for whatever deficiencies she had and she emerged as one of the
greatest leaders.

“I want you to leave here today believing that you are destined to lead.
The only place that is crowded is the lower walks of life. The higher
you go, the easier it becomes, but you must be determined to get
yourself out of the crowd. I look forward to hearing great things about
you all.”

PDP To Work With Aggrieved NewPDP Members In APC