Miracle! Boy Comes Back To Life A Day Before Doctors Turned Off His Life Support

by Tony Orji
in Inspiration
Reading Time: 2min read
1
Share on FacebookShare on TwitterShare on Whatsapp 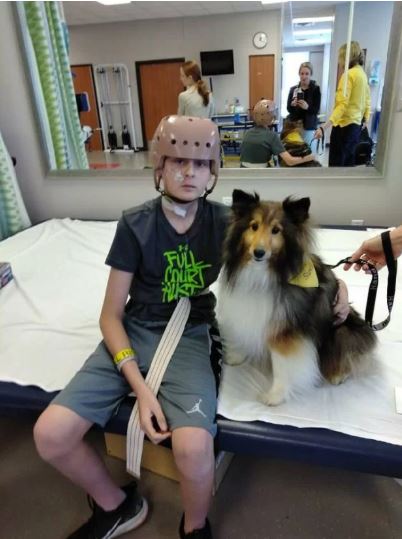 Thank you Jesus !
Miracle! This 13-year-old boy opened his eyes a day before doctors were
due to turn off his life support machine, Metro UK reports.

Trenton McKinley’s parents had just signed papers to have their son’s organs donated after he suffered a severe brain trauma.

He
suffered a severe brain injury two months ago when the car he was in
was flipped over in a crash. The teenager, from Alabama, suffered seven
skull fractures and has been in hospital ever since.

‘I hit the concrete and the trailer landed on top of my head. After that, I don’t remember anything,’ Trenton told Fox 10.

His parents were told by doctors that their son ‘would never be normal again’.

‘All
I saw was a stretcher with his feet hanging out. He was dead a total of
15 minutes,’ Trenton’s mother, Jennifer Reindl, said.

‘When he
came back, they said he would never be normal again. They told me the
oxidation problems would be so bad to his brain, that he would be a
vegetable if he even made it.’

Trenton was barely breathing in
the days following the crash and his mum made the heartbreaking decision
to sign papers to donate his organs.

‘Five kids needed organs
that matched him,’ Jennifer said. ‘It was unfair to keep bringing him
back, because it was just damaging his organs even more.’

A day
before doctors were going to take Trenton off of life support, the
13-year-old began showing signs of brain activity and movement.

He
started breathing on his own and in late March, he woke up speaking
full sentences, his mother wrote on a Facebook fundraising page. Trenton
still has a long road to recovery and has had surgery on his brain
three times already.

He will need another operation to reconnect a missing piece of his skull, his mother wrote online.

Trenton said he believes he went to heaven before he came back to life.

How To Stop Wishing…and Start Living Your Life