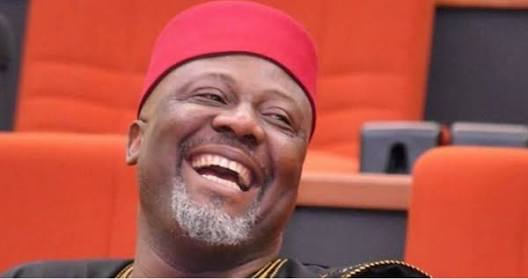 The Kogi State High Court sitting in Lokoja, on Wednesday granted the
embattled senator representing the Kogi West, Senator Dino Melaye bail,
in the sum of N10,000,000 and a surety in like sum.

Melaye, who
has been on admission at the National Hospital Abuja, and under police
custody, was finally granted bail following his arraignment on
allegations bordering on dealing in illegal firearms, etc.

The
Chief Judge of Kogi State, Justice Nasiru Ajanah, in his ruling, stated
that health condition of the accused stood as enough reason to grant
him bail, adding that the offence alleged is not capital in nature.

He
explained that the prosecution failed to show that if granted bail, the
accused will jump bail, just has he admitted Melaye on bail of N10
million and a surety in like sum.

According to him: “The health
situation of the 3rd defendant had earlier been admitted by the
complainant to be such that they do not have adequate facilities to take
care of him is a factor which merits consideration in this case”.

He
further stated that as at the time of this application made, the 3rd
defendant was at Police Headquarters in Lokoja and the prosecution
expressly stated that they had no medical facilities.

Melaye,
along with Kabiru Seidu a.k.a Osama and Nuhu Salishu a.k.a Small were
arraigned before the Senior Magistrate Court 2 Lokoja, following which
he was remanded in police custody under the Inspector General of Police.

The
defence counsel, led by Chief Mike Ozokheme (SAN), filed an application
for bail at state High Court upon which the leading prosecution
counsel, Dr Alex Izinyon (SAN), challenged it via a counter affidavit
praying he be remanded in custody, for fear he might tamper with the
course of justice.

Why You Shouldn’t Just Be Praying “Blindly”