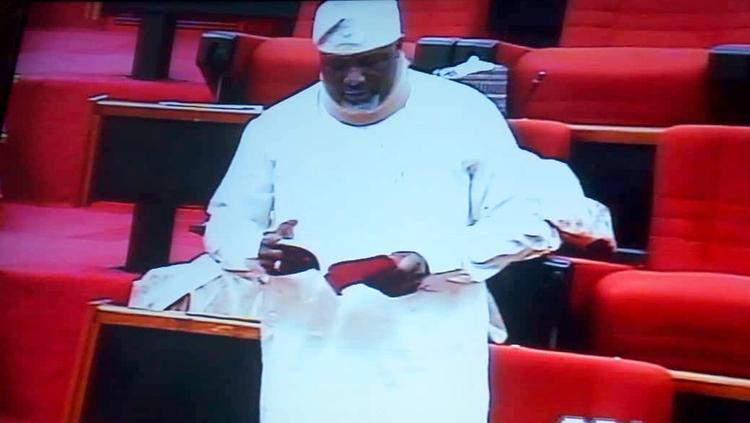 Senator Dino Melaye who has been ‘bed-ridden’ since he landed in the
hospital after a failed attempt to evade being taken to Kogi State by
the Nigerian police, took actions that threw the Senate into a rowdy
session.

The lawmaker, raising a point of
order on Wednesday, thanked his colleagues, members of the House of
Reps, his constituents and the Nigerian populace for standing by him
during his travails with the police.

He also took his time to thank the leadership of the People’s Democratic Party (PDP) for their support.

“Specially,
I appreciate the Peoples Democratic Party for making statement during
my recall exercise and asking everyone to stay aback. Politics has been
shown not to be individualistic but to be about issues and purpose. To
the National Chairman and executives of PDP in Kogi State, I salute
you.”

Mr Melaye, who attended the chamber with a neck support,
also asked the Senate President, Bukola Saraki, to mandate the
sergeant-at-arms to create a seat for him at the opposition wing of the
chamber.

Thereafter, he announced he would sit beside former
Senate President, David Mark, pending the time a seat will be allocated
to him.

“I have a special request to you Mr President,” he said.
“Because of the trauma I went through and I’m still going through, I
want to seek your indulgence that you will call on the Sergeant-at-arms
to look for a comfortable seat for me on this side of the divide
(pointing to the opposition wing) because I am no longer comfortable
sitting here. So, I want to ask the Senate President that you mandate
the sergeant-at-arms tomorrow to look for a seat for me on this other
divide of the chamber.

His colleagues perceived a suspicion that he had concluded plans to decamp to the PDP.

Mr Melaye thereafter moved to the opposition side to sit beside David Mark.

PT
reports that Melaye’s movement was greeted by rowdiness among lawmakers
at the Senate floor with those who spoke later expressing mixed
reactions. The PDP senators spoke in favour of his move while APC
senators tried to prevent his movement.

The Senate President,
Bukola Saraki, granted his immediate prayer of sitting beside Mr Mark
for the day while noting that his request for a permanent seat at the
opposition wing will be looked into. But the decision didn’t go down
well with APC senators.

First to oppose was the Senate Leader,
Ahmed Lawan, who said Mr Melaye’s movement without proper allocation
negates Order 56 (3) of the Senate.

“Senator Dino Melaye remains
one of our senators of the APC stock. I sat there for eight years and I
know how the seats there are. I have sat here for the last three years
and I know the difference. We have the best seat to give him at this
side. If there is any difficulty with his seat, we’ll find any other one
for him.”

He requested the chief whip to bring Mr Melaye back to the APC wing of the chamber.

Next
was the Deputy Senate President, Ike Ekweremadu, who argued that Mr
Melaye’s action was borne out of his welfare and right to exercise
freedom. He urged APC senators to respect the action.

Godswill
Akpabio, the Senate Minority Leader, said the movement is not about
party allegiance. He said the PDP is willing to accept any APC senator
who wishes to cross.

“Where we are now is the Nigerian Senate.
Whether to the left or the right. At any point in time that any senator
on the left feels that his or her seat is not comfortable. He is
welcomed here. I want to welcome Senator Dino here. We are the ones that
should have complained, but we are not complaining. We must be our
brothers’ keepers,” he said.

Amidst rowdiness still, Barau Jibrin
(Kano-APC) said the National Assembly is empowered to regulate its
proceedings according to section 60 of the constitution. He prevailed on
the Chief Whip to return Mr Melaye to his seat pending the time he is
allocated another seat in accordance with Senate rule.

“The order
of the Senate clearly specifies that every senator shall sit on a seat
that has been assigned to him by the Senate President. Therefore, the
position canvassed by the Deputy Senate President does not hold here
because it is against the Nigerian constitution.

“In this regard,
the Senate Leader or the Chief Whip should as a matter of urgency, due
to the health situation of Senator Dino, have a seat that is OK for him.
Sitting in a seat different from what is assigned to him is against the
constitution.”

Also in defence of APC senators, the Chief Whip,
Olusola Adeyeye, urged Mr Saraki to avoid setting a bad precedent by
allowing the change of seat.

“We
are setting a bad precedent. We are beginning to institutionalise chaos
if we use any excuse to transfer any member across the aisle. On the
basis of the constitution, I will take Dino across this place and any
seat he wants, we will give to him.”

Saraki however defended his
position noting that Dino Melaye did not at any time mention that he
wanted to defect to another party.

“I don’t think at any time in
his contribution the issue of change of allegiance or party ever came
up. It’s not an issue that has come up today at all. He talked about his
state of mind and comfort. None of us has been through what he has been
through neither do I think the rules have ever foresaw this kind of
situation. As part of our spirit of giving support, we will accommodate
his request…”