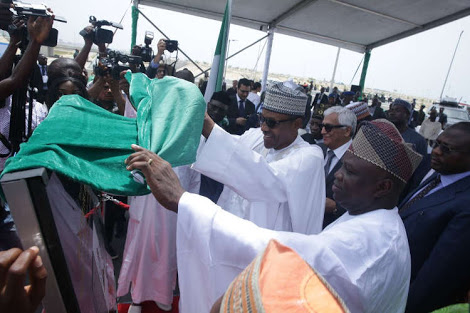 Nigeria’s economy will be earning over $560 billion when Lekki Deep Sea
project finally takes off in 2020 with an estimated $361 billion
generated from the port’s concessioning in addition to $200 billion
coming from taxes and revenue.

Speaking during
the flag-off of the deep seaport, President Muhammadu Buhari disclosed
that over 170,000 direct and indirect jobs would be generated from the
project.

According to Buhari, the project targets about 1.5
million 20-foot Equivalent Units (teus) container capacity annually,
which is expected to grow to 2.7 million and 4.7 million teus when the
port begins operation.

Daily Sun reports that the President who
was represented by the Vice President, Prof. Yemi Osinbajo, said the
port, when operational, would receive larger vessels such as Panamax and
post-Panamax vessels.

“The promoters of this project are
targeting about 1.5 million teus container capacity yearly, which we
expect to grow to about 2.7 million and 4.7 million teus when the
project operation commences. With this, the Lekki Deep Seaport will
become one of the best deep water ports in our region and serve as hub
for port operations in the whole of West Africa.

“The promoters
also planned to dredge the port channel to about 16 meters, which is not
currently obtainable in any port in the country. This is an indication
that ships of larger capacity, Panamax, post-Panamax ships and very
large crude carriers will now be able to visit the port, and greater
efficiency and economies of scale will generate significant revenue for
Nigeria’s economy,” he said, noting that the Federal Government has in
the past two budgets provided an aggregate of N90 billion for the
development of special economic zones. He added that the deep seaport
project is in line with the objectives of creating such economic zones.

Why Many Young Couples Are Failing In Marriage Today

8 Reasons We Believe Jesus Really Rose From The Dead