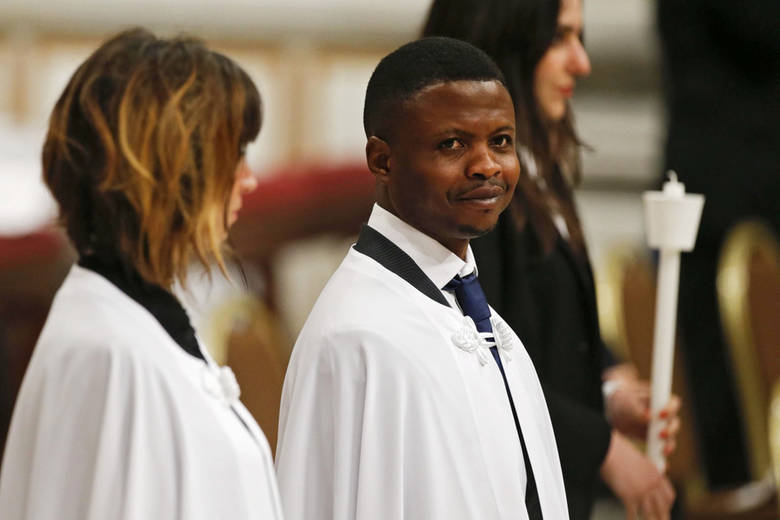 A Nigerian who migrated to Italy has been hailed as a hero and had his
head baptized by head of the Catholic church, Pope Francis.

Tens
of thousands of pilgrims gathered in St. Peter’s Square on Sunday for an
Easter mass led by Pope Francis, who on the previous night, baptized
eight people, including a man known in Italy as the “migrant hero.”

Nigerian John Francesco Ogah, 31, was praised
after he intercepted another man attempting to rob a supermarket in
Rome’s Centocelle neighbourhood on Sept. 26, 2017.

According to
Italian news reports, Ogah had been begging for spare change outside the
Carrefour market when a masked thief, armed with a meat cleaver, tried
to make off with 400 euros ($636 Cdn) he had stolen from the cashiers.

Security
cameras captured Ogah’s courageous next steps: With nothing more than
his bare hands, he confronted the thief, wrested the cleaver away and
held him by the collar until police arrived, after the man fell from his
attempted getaway motorcycle.

Ogah, who did not have permission
to stay in Italy, then left the scene, fearing it would be discovered he
did not have documents, according to La Repubblica newspaper.

Police
using footage from the surveillance cameras tracked him down and
rewarded him by helping him get legal permission to stay in the country.
The police captain who worked in the neighbourhood stood at Ogah’s side
as his godfather during Saturday night’s baptism.

Pope Francis opened the festivities with a Tweet to his global flock: “Our faith is born on Easter morning: Jesus is alive!”

He
then delivered his “Urbi et Orbi” message (“to the city and the
world”)message from the central balcony of St. Peter’s Basilica.

Francis
called for peace in a world marked by war and conflict, “beginning with
the beloved and long-suffering land of Syria,” and extending to the
entire Middle East, the Korean peninsula and parts of Africa affected by
“hunger, endemic conflicts and terrorism.”

The Pope reflected on
the power of Christianity’s core belief — that Jesus rose from the dead
following the crucifixion. The pontiff said the message of the
resurrection offers hope in a world “marked by so many acts of injustice
and violence.”

“It bears fruits of hope and dignity where there
are deprivation and exclusion, hunger and unemployment; where there are
migrants and refugees, so often rejected by today’s culture of waste,
and victims of the drug trade, human trafficking and contemporary forms
of slavery,” the Pope said.

He called for a “swift end” to
carnage in Syria, demanding that aid be delivered to the needy there and
calling for “fitting conditions for the returned and the displaced.”

The
Pope also urged reconciliation in Israel and hoped that mutual respect
would “prevail over divisions” in Yemen and the entire Middle East.

2019: The Older Generation Must Give Way For Youths – Ex-President IBB Insists