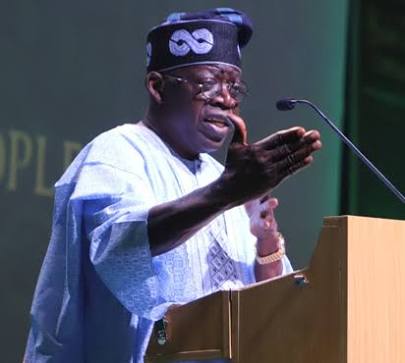 The Peoples Democratic Party has cautioned the All Progressives Congress
(APC) National Leader, Asiwaju Bola Tinubu, to stop playing God, saying
Nigerians have the faculty and freedom to determine the leadership that
best suit their desires without anybody’s control.

The party
also advised Tinubu not to allow himself to be used a second time as he
still bears a gross part of the blame for the enthronement of “this
incompetent, divisive, nepotic and inherently corrupt administration of
President Muhammadu Buhari,” which has brought the nation to its knees
in three years.

PDP National Publicity
Secretary, Mr.Kola Ologbondiyan, in a statement in Abuja on Thursday,
said Tinubu’s speech, at his colloquium, rather than being a damage of
the PDP, ended up amplifying an admittance of the failure of President
Buhari and the APC administration.

Ologbondiyan said without
listening to the prompting of any politician, Nigerians across the board
have taken the liberty to accept PDP’s apology which was made
patriotically in the overall interest of national healing,
reconciliation, unity and cohesion.

He said, “The PDP watched
with amusement as Asiwaju Tinubu struggled with words to appease
President Buhari and give him assurances that he can win a second term
election in the face of mass failure both in governance and in their
discredited, rejected and troubled platform.

“It was a direct
admittance of failure and indictment on President Buhari’s
administration, when Asiwaju pointedly told the President that the ship
of the nation, under his (Buhari’s) watch, still needs to be rescued,
almost three years down the line.

“It is tragic that Asiwaju had
to tutor his visitor, who had no policy direction since his election in
2015, by engaging in a revision of the programmes and policies of the
PDP, such as the leasing system, the mortgage and pension schemes which
boosted the economy and directly impacted on the lives of Nigerians.

“More
pathetic is the fact that the APC leader presented the PDP programmes
as if he was introducing novel ideas in the economy. This clearly stood
with our position that the APC government is incompetent and lacking in
ideas of how to move the nation forward.

“While we congratulate
the Lagos Governor Emeritus on his birthday, the PDP considers it
needful, to forewarn him to study the current ambience of Nigerian
politics as it relates to the failures of the Buhari Presidency and the
fact that the citizens have since rejected this Presidency and the APC,
so that Asiwaju will not find himself swimming against the tide.”