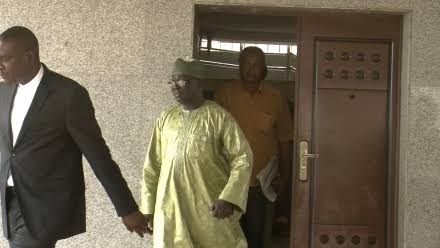 The Abuja Division of the Court of Appeal on Wednesday quashed the
sentence of two years imprisonment with option of N750,000 fine imposed
by the High Court of the Federal Capital Territory, Abuja, on a former
official of the Police Pension Office, Yakubu Yusuf, for stealing N24bn
pension funds.

A three-man panel of the Court of Appeal headed
by Justice Abdu Aboki, in a unanimous judgment, described the High
Court’s sentence as unreasonable and substituted it with a total of six
years’ imprisonment with an addition of N22.9bn fine.

Justice
Emmanuel Agim, who delivered the lead judgment of the court, ruled that
“the sentences levied” by the High Court “are clearly light and lenient
ones.”

The justice ruled that this allowed “the convict, who
had admitted misappropriating or stealing N24bn, the option to pay the
sum of N250,000 per count of offence in lieu of serving a prison term of
two years for the offence,” to enjoy the huge balance he had in his
possession.

He added that the “amount” of the sentences “is paltry, a pittance and unreasonably low.”

Justice
Agim noted that it was “disproportionate to the amount stolen and
therefore can comfortably and quickly be paid by the convict from the
humongous amount stolen.”

He added that with the sentence, the
convict would be left with “a huge balance of the stolen funds in his
possession and without really causing him any pain of punishment.”

Justice
Abubakar Talba of the Federal High Court in Gudu, Abuja, had in his
judgment delivered on January 28, 2013 convicted Yusuf and sentenced
him to two years imprisonment with an option of N750,000 fine.

Yusufu,
had after pleading guilty to three of the counts preferred against him
and others, was convicted and sentenced to two years imprisonment on
each count with an option of paying N250, 000 fine on each of the three
counts.

Although, two years imprisonment was the maximum jail
term with an option of undisclosed fine prescribed as punishment by
Section 309 of the Penal Code Act, under which Yusufu and his
co-defendants were charged, Justice Talba ordered that the two years
imprisonment imposed on the convict should run concurrently with the
option of paying the N750,000 fine.

The convict had promptly paid the fine and walked free shortly after the first judgment was delivered.

The
Economic and Financial Crimes Commission had through its private
prosecutor, Mr. Rotimi Jacobs (SAN), appealed against the High Court
judgment.

Delivering the Court of Appeal’s lead judgment on the
appeal on Wednesday, Justice Agim held that the considerations of the
High Court in imposing the light sentence were contrary to judicially
established principles.

He noted that there was no monetary value
of the properties already forfeited by the convict to justify the light
sentence imposed on him by the High Court.

“I hold that the
sentence of fine of N250,000 in lieu of imprisonment for a term of two
years for each offence is unreasonable, unjust, unfair, irrational,
arbitrary, and contrary to judicially established principles as it is
not the result of a judicious and judicial exercise of the trial court’s
sentence discretion,” he said.

He held that considering the
humungous amount stolen, the nature and gravity of the offence, its
destructive effect on the country, and its impact on retired police
officers, the trial court ought to have imposed a severe sentence that
would deter further commission of such crime and prevent the convict
from retaining any part of the proceeds of the crime.

According
to The Punch, in passing a fresh sentence on Yusufu on Wednesday,
Justice Agim imposed two years imprisonment on the convict on each of
the three counts and in addition a fine of N20bn on the first count,
N1.4bn on the second count and N1.5bn on the third count.

Justice
Agim held that while the monetary fines on each of the counts
amounting to N22.9bn would “run cumulatively,” the two years jail terms
on each of the three counts would run “consecutively,” giving rise to a
total of six years imprisonment.

“Considering the
humongous amount stolen, the nature and gravity of the crime and its
destructive effect on the country and its impact on retired police
officers and the grave breach of public trust, a severe sentence that
would deter the further commission of such a crime and prevent the
convict from retaining any part of what he stole to avoid him obtaining
financial benefit from his crime should be imposed.

“The sole issue raised for determination in the appellant’s (EFCC) brief is resolved in favour of the appellant.

“On the whole, this appeal succeeds as it has merit.

“I
hereby quash the sentences of two years imprisonment or a fine of
N250,000 for each of the offences in counts 18, 19 and 20 and substitute
them with the following sentences for each count as follows:

“Count 18: The convict is sentenced to two years imprisonment and in addition a fine of N20bn.

“Count 19: The convict is sentenced to two years imprisonment and in addition a fine of N1.4bn.

“Count 20: The convict is sentenced to two years imprisonment and in addition a fine of N1.5bn.

“The prison terms shall run consecutively and the monetary fines cumulatively.”

Expressing
concerns over the plight of the retired police officers who must have
been at the receiving end of the massive theft of the pension funds,
Justice Agim noted, “The offence committed by the respondent, by its
nature, involves a grave breach of trust, erodes public confidence in
public governance and causes retired police officers hardship and
suffering.

“The funds stolen or misappropriated by the convict
are police pension funds for the payment of monthly pensions and other
retirement benefits of police officers nationwide.

“The theft or
misappropriation of over N24bn of that fund would make the prompt
payment of monthly pensions to retired police officers very difficult,
if not impossible, with attendant hardship and suffering inflicted on
such retired officers who rely on their monthly pensions as their only
means or source of sustenance in retirement.

“The hopeless,
helpless and dehumanising conditions the retired police officers have
been put into by this offence that has become habitual and widespread
amongst government officials in pensions departments of government whose
duties are to be in custody of pension funds and process the payment of
gratuities, monthly pensions and other retirement benefits to retired
public servants is obvious.”

Justice Abdu Aboki, who led the
three-man panel, and another member of the panel, Justice Mohammed
Mustapha, agreed with the lead judgment.

Tips For Eating Out Alone & Still Enjoy Yourself