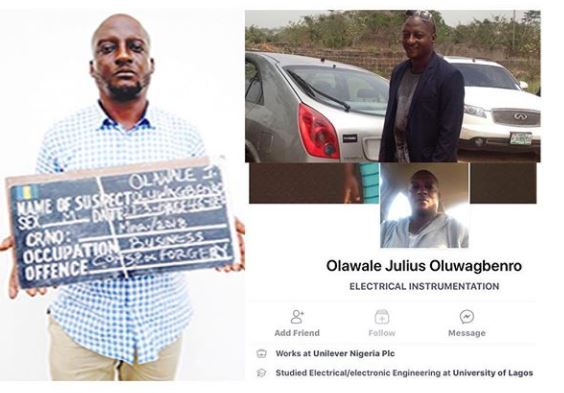 American Embassy on Tuesday slammed a Nigerian, Julius Olawale
Oluwagbenro, 46, with life ban for allegedly posing as an engineer,
among other lies in order to get American Visa.

According to the
suspect, Tuesday was his fourth attempt to get the American Visa. He
had thrice been rejected, but this fourth time got him a life ban.

He
was alleged to have told the Embassy that he attended University of
Lagos (UNILAG), Akoka, where he studied Electrical Electronics. He was
also accused of claiming to have once worked with Procter and Gamble.

Police
said that another lie that Oluwagbenro told was that he was going to
the US for burial of his uncle, who died of cancer in New York.

He then lied that he was presently working with Unilever as an engineer, with a monthly salary of N657,000.

According to New Telegraph, recovered from him are some documents believed to be fake.

One of the documents is a police letterhead, stating that
Oluwagbenro had a damaged passport and that the Embassy should, “kindly
render any assistance he may require”.

Another document is a
First Bank statement, showing that Oluwagbenro had N6.2 million in his
account. The item which, however, nailed Oluwagbenro was the phone
number of the contact person he was supposed to meet in America.

The
Embassy discovered that the phone number of the contact person had been
used for over 190 applicants. While Oluwagbenro’s documents showed that
the contact person lives in Brooklyn, New York, the owner of the number
lives in Chicago.

In an interview, he confessed thus:

“The truth is that I wasn’t the person that filled my visa form. My
agent did. I was not even aware of most of the information he filled on
the form. I sell cars in Ibadan.