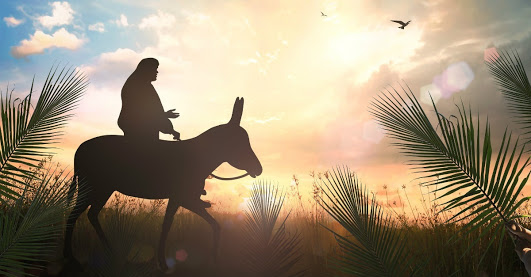 God never missed an opportunity to use powerful symbols throughout
Scripture. Jesus’ famous ride on this lowly animal reveals much about
Christ’s character and purpose.

Prior to entering Jerusalem,
Christ instructed his disciples to acquire for him a donkey Matthew
21:1-5. (In Matthew’s Gospel a donkey and a colt, two poetic Hebrew
parallel phrases.)

Why did Jesus ride a donkey?

1. Christ is claiming His rightful place as the prophesied Messiah
Zechariah
wrote: “Behold, your king comes to you, triumphant and victorious. He
is humble and riding on an ass, on a colt, the foal of an ass.”
(Zechariah 9:9) KJV.

Every Jew would know Zechariah’s messianic
prophecy. That’s why the crowds hailed Jesus as their king shouting,
“Hosanna! Blessed is he who comes in the name of the Lord!” (Matthew
21:9). Jesus is the true Davidic Messiah and king.

2. Jesus rode a donkey to symbolize peace
Why didn’t Jesus ride a warhorse, as He did in Revelation? Mark Boda explains:

In
the ancient Middle Eastern world, leaders rode horses if they rode to
war, but donkeys if they came in peace. First Kings 1:33 mentions
Solomon riding a donkey on the day he was recognized as the new king of
Israel. Other instances of leaders riding donkeys are Judges 5:10; 10:4;
12:14; and 2 Samuel 16:2.

The mention of a donkey in Zechariah
9:9-10 fits the description of a king who would be “righteous and having
salvation, gentle.” Rather than riding to conquer, this king would
enter in peace.

Zechariah 9:10 highlights this peace: “I will
take away the chariots from Ephraim and the war-horses from Jerusalem,
and the battle bow will be broken. He will proclaim peace to the
nations. His rule will extend from sea to sea and from the River to the
ends of the earth.”

Note the many details symbolic of peace in this prophecy:
“Take away the chariots”: an end to the main vehicle of war.
“Take away… the war-horses”: no need for horses used in war.
“The battle bow will be broken”: no need for bows or arrows for fighting.
“He will proclaim peace to the nations”: His message will be one of reconciliation.
“His rule shall be from sea to sea”: the King will control extended territory with no enemies of concern.

Jesus
fulfills this prediction of Zechariah. Worldwide peace proclaimed by
this humble King will be a fulfillment of the angels’ song in Luke 2:14:
“Glory to God in the highest, And on earth peace, goodwill toward men!”
(NKJV).

3. Christ’s journey on a donkey harkened back to the foreshadowing of a father sacrificing his own only son
Isaac, a type of Christ, rides a donkey to be slain by his father Abraham on the altar (Genesis 49:10-12).

4. Jesus’ journey on a donkey symbolized God’s blessing to His people
Jacob’s divine blessing over his son Judah includes a reference to a donkey and a donkey’s foal (Genesis 49:10-12):

“The
scepter will not depart from Judah, nor the ruler’s staff from between
his feet until he to whom it belongs shall come and the obedience of the
nations shall be his. He will tether his donkey to a vine, his colt to
the choicest branch; he will wash his garments in wine, his robes in the
blood of grapes. His eyes will be darker than wine, his teeth whiter
than milk.”

Jesus is born of the tribe of Judah, eternally
enthroned. Jacob’s prophecy describes a king who washes with wine (His
blood) and has white teeth (purity). Incidentally, read verses
14-16about Isaachar, the rawboned donkey, who bows in submission!

5.
Jesus’ triumphal journey teaches us that after all of the sacrifices
offered for sin, we can enter the rest of faith because of His final
sacrifice (Hebrews 10:12)
Exodus 23:12 states God’s clear command:

“Six days do your work, but on the seventh day do not work, so that
your ox and your donkey may rest, and so that the slave born in your
household and the foreigner living among you may be refreshed.”

6. Emissaries sent donkeys overloaded with gifts to appease the wrath of an enemy, preventing bloodshed
Jacob
sent donkeys packed with treasures to avoid the wrath of his brother
Esau (Genesis 33:8). Abigail brought donkeys packed with food to keep
David from killing her family. Nabal, her husband, had angered the
king-to-be. The wise woman knelt before David and said in 1 Samuel
25:26:

“And now, my lord, as surely as the Lord your God lives
and as you live, since the Lord has kept you from bloodshed and from
avenging yourself with your own hands, may your enemies and all who are
intent on harming my lord be like Nabal.”

7. God used a donkey to speak His judgment!
Yes, Balaam’s donkey actually warns the prophet of His disobedience. In Numbers 22, Moses writes:

“…
Then the Lord opened the donkey’s mouth, and it said to Balaam, ‘What
have I done to you to make you beat me these three times?’ Balaam
answered the donkey, ‘You have made a fool of me! If only I had a sword
in my hand, I would kill you right now.’ The donkey said to Balaam, ‘Am I
not your own donkey, which you have always ridden, to this day? Have I
been in the habit of doing this to you?’ ‘No,’ he said. Then the Lord
opened Balaam’s eyes, and he saw the angel of the Lord standing in the
road with his sword drawn. So he bowed low and fell facedown. The angel
of the Lord asked him, ‘Why have you beaten your donkey these three
times? I have come here to oppose you because your path is a reckless
one before me.’”

Samson defeated the Philistines with the jawbone of an ass. (Judges 15:15).

God
sent a lion to devour a false prophet in 1 Kings 13:27-31, while his
donkey safely stood and watched. The lion did not eat the donkey. The
donkey carried the slain prophet back home at God’s behest.

King
Jehu rode a donkey into Samaria, a kind of false Jerusalem, in order to
destroy the temple of the false god Baal (2 Kings 9:11-10:28).

Christ entered Jerusalem’s temple and pronounced judgment as He overturned the money-changer’s tables in Matthew 21:12:

“My house shall be called a house of prayer, but you have made it a den of thieves.”

8. Jesus demonstrated that he was the burden-bearer who came to save us
Baby
Jesus was born in humility. Remember, a donkey carried a poor, pregnant
mother named Mary all the way from Nazareth to Bethlehem. (Luke 2:4-7).
This gentle beast of burden carried the Savior of the World. Jesus used
the image of Mary’s donkey to connect with the common people. He came
for them.

Jesus embraced the poor, weak and oppressed during his
time here on earth. Christ’s sweet, simple story of the Good Samaritan
in Luke 10:33-34 is a perfect symbol of his love and compassion:

“But
a Samaritan, as he traveled, came where the man was; and when he saw
him, he took pity on him. He went to him and bandaged his wounds,
pouring on oil and wine. Then he put the man on his own donkey, brought
him to an inn and took care of him.”

The Bible is rich in symbolism. Enjoy the triumphal entry in a deeper way this year.